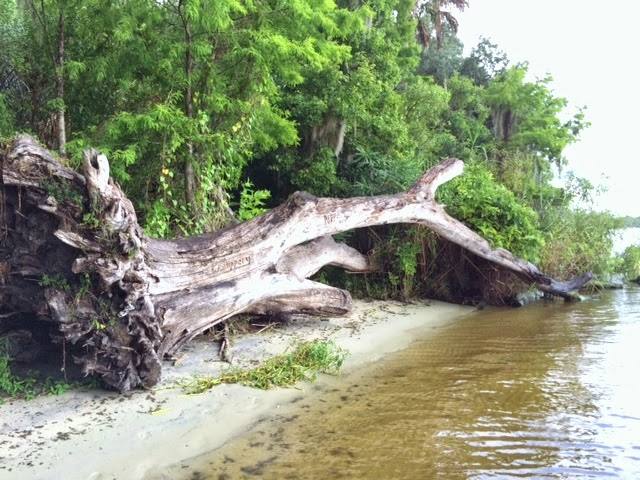 Our family took my two nephews and Cindy, my sister in law on a jet ski ride.
Curtis, Crockett and Cowboy acquired this new toy free of charge, for towing the owner to shore
after sinking it in the river.  I will save that story for another day. This day, our plan was to ferry everyone from the boat ramp,
two at a time, up the St. Johns river to a beach area. There
were seven of us. After the second trip, the skies started to look cloudy...

into the river.  Sprinkles were starting, but not a big deal.  It looked like it would pass.  As Curtis
was giving each of the boys a turn on the jet ski, we heard thunder.  “Out of the water!” I yelled.
We take thunder and lightning serious living in Florida.  It passed quickly, and we decided

that it had moved on, so we stayed. 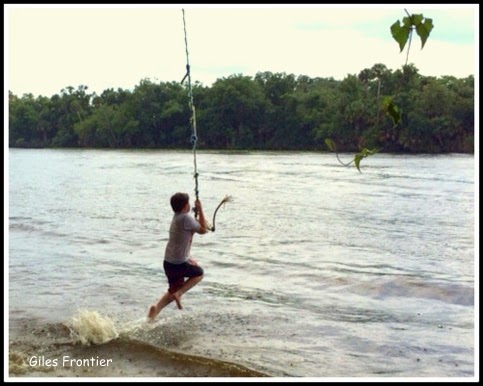 Just as Curtis was coming up to trade off boys, the skies opened up.  We were on a beach
that backed up to deep woods.  The only access out is by water.  By now, the lightening and
thunder were VERY close and the wind picked up severely.  Palm fronds were falling from
the trees and there was no cover to be found.Generally, a Florida storm can go as quick as it comes, except this one.
Cindy wrapped up in a towel, as we sat in our dripping chairs. I discovered that my life jacket
made a make shift umbrella.  There is not a blue cloud in the sky and it is getting dark.
I had a silent prayer.
I asked God to protect us from the storm.
I did not really want to camp out there, but all I wanted was to be safe from the storm.
We were in charge of four children’s safety, and getting back in the water was not a good idea.

You probably know by now, that when we take anyone, anywhere, there will be a misadventure.

I like to think of it as making memories.  If this trip had just been a rip roaring jet ski adventure,
would all the cousins remember it? However, add in a torrential rain storm with lightening
and no way home, now THAT they will be talking about for years.

Yep, that is why they call us the “cool” aunt and uncle. 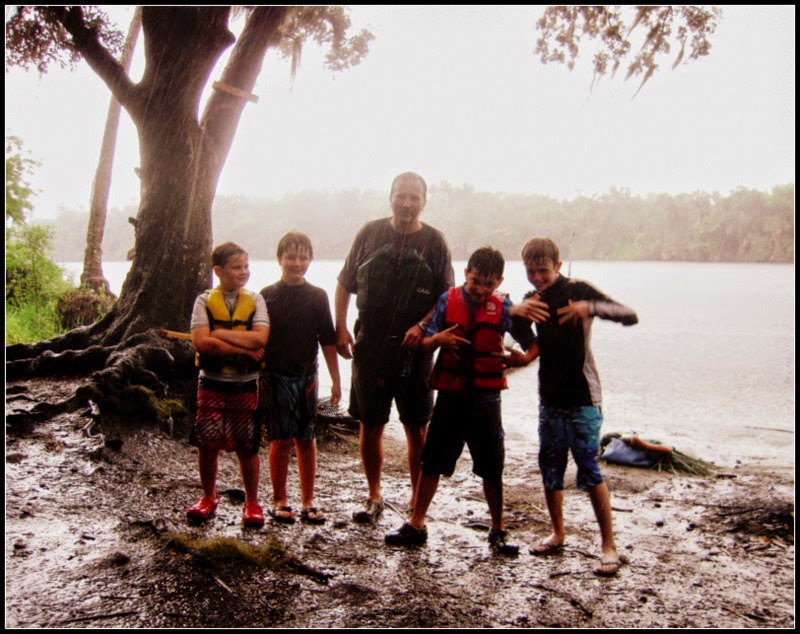 Curtis began trying to flag down any boat that passed by. He realized this storm was not
passing and we might have a problem.  Several boats passed, flying themselves to get out of
the storm, but they passed us by.
I prayed again, please keep us safe from the storm.
I thought we could put our outdoor skills to good use and make a shelter from palm fronds
if we were going to be stuck out there after dark.  When the rain eases up,
the mosquitoes with surely come.
As the rain ran into my ears and dripped into my eyes, my life preserver gave up as shelter.
I glanced at Cindy, who was in the same shape as me.
We realized our fun limit had been reached.
At that moment, a pontoon boat pulled in.
“How in the world did you all get here?” asked the driver.
Curtis quickly explained the situation as he piled the kids and Cindy on board.  I offered to stay

with him to bring in the jet ski when it was safe, but he kept Crockett instead. 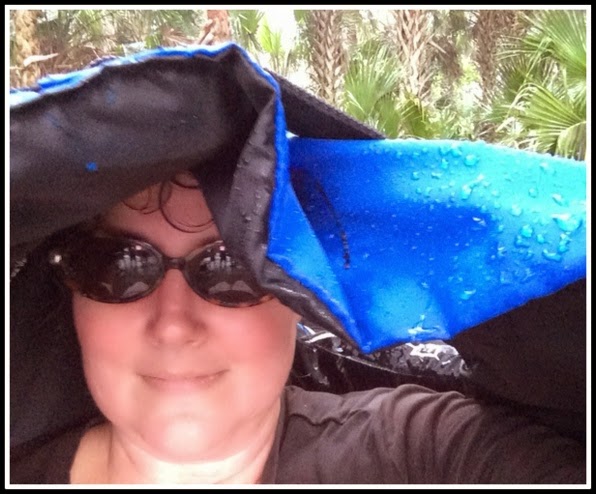 I was trying to save my new cell phone from ruin, or else I would have taken a photo of our captain.
He had tethered a six foot, rainbow-colored pool float with and open backrest to his head.
He held it down with one hand and steered in the blinding rain with the other.
I will remember that for a long time to come.
One of his companions was huddled under a very tiny table that was bolted to the floor. The rest
of us were freezing cold, Cowboy was in a whole body shiver.
The Florida heat gave way to a quick cool down that left stranded boaters frozen. 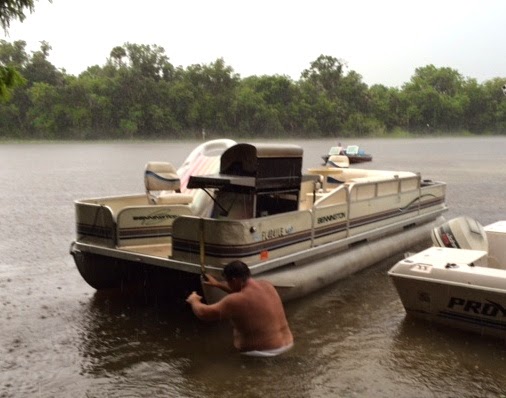 We were all delighted to see the boat ramp approaching, our captain ran aground
in his excitement.  All of us bailed out into the river and discovered the water was so nice
and WARM. We thanked our heroes for bringing us to the ramp and saving us from
a perilous evening.  As we waited for Curtis to return, we realized that the pontoon boat
that brought us in was the last boat that came in on the river that evening.
Thank you, Lord Jesus.
He always pulls us through, no matter the situation.
Mud laden, river soaked and tired, we arrived home.  It was still storming. We all took showers
to clean up, warm up and go to bed.  Tomorrow, this will become one of those fun memories the kids
will be talking about at sleepovers for years to come.  Cool. 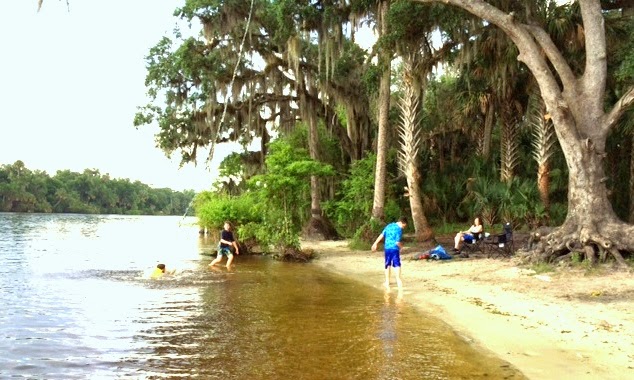