Preserving Florida Traditions as a Family 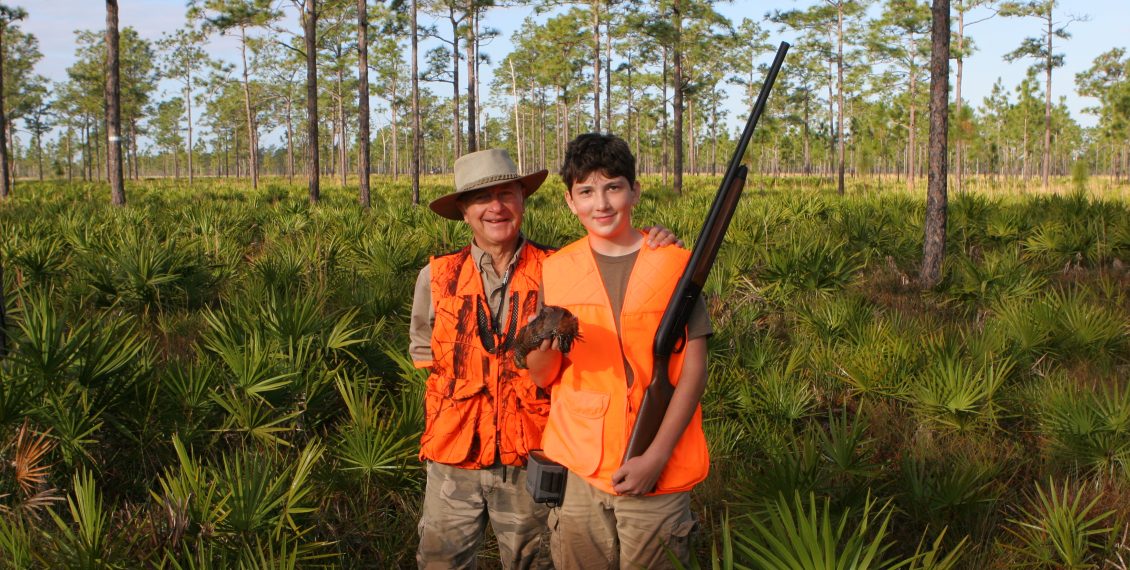 Quail hunting was a staple in my grandparent’s generation in providing food for the family. However, I had not experienced a hunt myself, but I remember having quail for dinner. My grandfather cleaned and dressed them out behind the barn and my grandmother would coat them in flour and fry them up in her cast-iron skillet.

In the last forty years, quail hunting has diminished in the south due to habitat loss. For instance, now the season is short and the daily limit is few. Quail live and nest on the ground and their habitat is dwindling fast.

My oldest son Grayson, 13, has inherited my grandfather’s love for the outdoors and hunting sports. Similarly, wonderful opportunities have come his way as he is developing his talent as a woodsman. He, along with five other boys, recently participated in a quail hunt. For example, this one was offered by the Florida Fish and Wildlife Conservation Commission and hosted by Quail Forever, a national organization.

The hunt took place at Babcock Ranch in Punta Gorda, Florida. This expansive property is owned by the same family for over one hundred years. It includes close to sixty-five thousand acres of the last parcel of undeveloped hydric (wet) pine Flatwoods in South Florida. It was purchased by the state as part of a continued conservation effort for future generations. 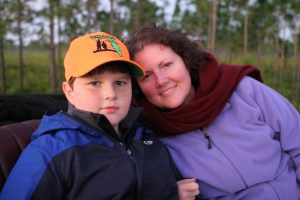 The hunt was originally going to be a boys weekend for my husband Curtis, Grayson, and our ten-year-old, Grant. After some research, Curtis suggested I go along for a family adventure together. My first thought was, no. This was going to be primitive accommodations, meaning no toilet or running water in a swamp with a whole bunch of stinky boys. I was looking forward to a weekend alone. Catching up on laundry, dishes, and mopping the floor was on the agenda. Yet the pull to experience what my boy loved so much changed my mind. 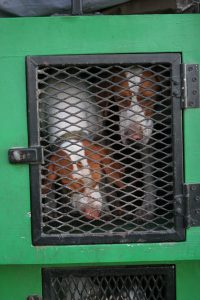 Upon our arrival, I saw a camp house that gave me hope of a toilet. The barking dogs and swamp buggies gave us a hint of what was to come. As the other participants arrived, we all pitched our tents around the camp house. The original primitive campsite was underwater. A toilet was available for nighttime, but during the day the palmettos would have to do.

Our hunt master for the weekend was Scott Ford. He along with the hunting guides are members of Quail Forever. All of them volunteer their time, swamp buggies, and their dogs to this event each year. Scott paired boys with a different guide each day to experience different styles and dogs.

There were volunteers in the kitchen who cooked our meals. Jay the head cook, Coral, who volunteers for school hours, and several others. When I asked Coral why she chose the youth hunts to volunteer at, she said: “ I love being outside, and ever since I went on my first hunt, I have wanted to help other kids have the same experience.” 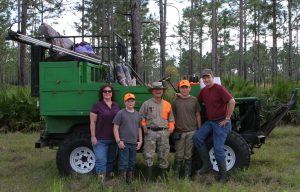 First, Nigel, the head guide arrived and was assigned to my family for Saturday’s hunt. He made an impression right away with his accent and his eagerness for the hunt to begin. Born in Rhodesia, he is an ecologist. He has worked in wildlife areas in Africa and has a love for the symbiotic relationship between land and animal. The more he talked, the more intrigued I became in wanting to know more about this man. Next, he made it clear that he would be picking us up by 4:30 am, no later. He had an agenda for the day and we were to be prepared.

The wake-up call was at 3:30 am. Breakfast was served and the swamp buggies were rolled in on trailers. Each child went with their hunting guide and we headed off to the preserve a few miles away. Grant and I rode with Nigel while Curtis and Grayson followed in our truck.

Curtis helped Nigel unload the swamp buggy as the others began arriving. It was a crazy scene. Roaring engines, barking dogs, and boys with shotguns. We loaded up and began our adventure, all scattering in different directions.

The ride was cold and windy as we drove through the fog for a few miles into a section of woods on a fire trail. We came to a stop. Nigel said it was time to be quiet, we were about to see why 5 am was the best time in the Flatwoods. Wow. A symphony of sounds began as the birds, frogs and other wildlife began to awaken. We sat in silence, except for the occasional dog whimper, and soaked in the beauty. The sun rose behind the palm trees and made a spectacular backdrop to begin our day.

Reba went on point. Grayson chambered a round and followed Nigel into the palmetto, right up to Reba. On command, she flushed the covey and fired a shot. However, It was stressful, nerve-wracking, and exhilarating all at the same time for those of us waiting in the buggy. I can’t imagine how it was for Grayson! He emerged from the palmetto beaming with pride, holding his first bird. In the end, Grayson said it was like an explosion of birds at his feet and when he recovered from the shock, he fired.

As the day progressed, each dog had a turn to run as Nigel coached Grayson. We watched, learned, and felt like we were part of something amazing that few get to discover. Nigel shared more about the training of his dogs. They seemed to be like his own children. “ These dogs are precious, they give us a lot of pleasure.“ Each has its own personality and strengths. There is always the one who is best, one who is injured, and one in training.

Blammer was in training. He was the largest of the dogs and the most excited to do his job. In addition, Blammer was so focused on finding a covey, that he traveled a mile away from us. Instead of hunting quail, we hunted Blammer.

Next, In order to get him back, we had to turn the buggy directly into the palmettos. Talk about a wild ride. I know what it is like to be tossed around in a clothes dryer. We followed the GPS tracker on his collar. The buggy climbed over fallen trees, went down into mud holes, and flattened palmettos. When we caught up to him, he was worn out and done for the day. We were relieved the dog hunt was over.

It was a successful day for Grayson. In addition, he embraced the challenge, each covey a test of skill. Similarly, Nigel taught us about the trees, plant life, and habits of the birds that lived in the preserve. He gave Grayson an anatomy lesson right in the field with the quail. Telling a juvenile by its wing pattern, its gender by the coloring on their face, and sharing the beauty of their design. In the end, Nigel’s enthusiasm for this bird made his lessons enthralling for us all. 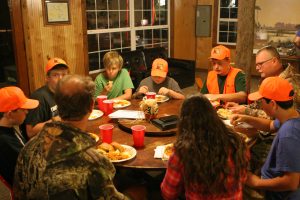 That night, laughter, and stories of the hunt and hide and seek filled the camp. Dinner, complete with apple pie. There was anticipation in the air as each boy was eager to learn what the next day would bring.

Next, waking up at 3:30 am wasn’t so bad on Sunday morning. As a result of the rough ride the day before, we were sore but ready to ride again. Sunday’s excursion brought more quail, broken down buggies, lost dogs, wildlife sightings, and memories burned in our hearts.

At last, our weekend was over. Everyone began packing up their gear. I thanked each person who was involved in this magnificent event. Each took time away from their families for three days to spend one on one time with these children.

However, the guides’ enthusiasm for their love of quail was encouraging to everyone. In addition, it inspired the kids to continue a Florida tradition that is lost today. These men and women have a love for the dogs who devote their life to the hunt and to the conservation of quail who are diminishing fast in the wild. 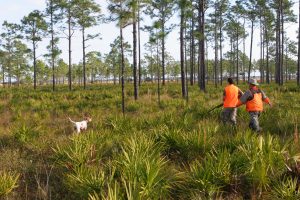 We returned home that evening. Then, I watched my son fry a batch of quail in his cast-iron skillet. An overwhelming feeling of nostalgia came over me. The memories of my childhood came full circle. To sum it up, this Florida tradition is still alive two generations later at my dining room table. 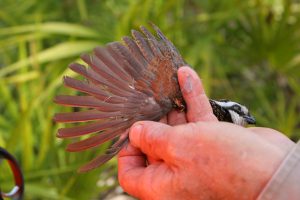 Grayson was forever changed by the opportunity to learn from people who are passionate about quail and their sustainability here in Florida. We were thankful as a family to sit down and eat a meal of, as Nigel would say, “ delicious little birds” that our young son harvested and prepared for us.