Falconry and Birds of Prey 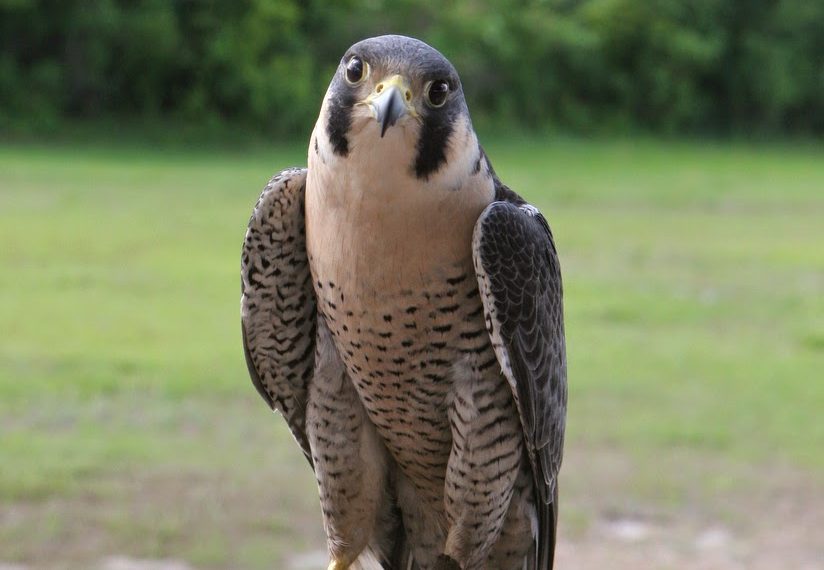 Our homeschool co-op visited the Avian Reconditioning Center
in Apopka, FL and were treated to a real wildlife show.
ARC has been serving the bird of prey community for ten years by
Carol and Scott. They have turned their property into a haven for rescue
birds and rehabilitation.  They work with area officials and clinics to house
and care for more than 50 birds.
My boys were actually out of town and I became the dorky homeschool mom
that went on a field trip without them. I am so glad I did and sorry they missed

out on such an adventure and education in birds of prey. 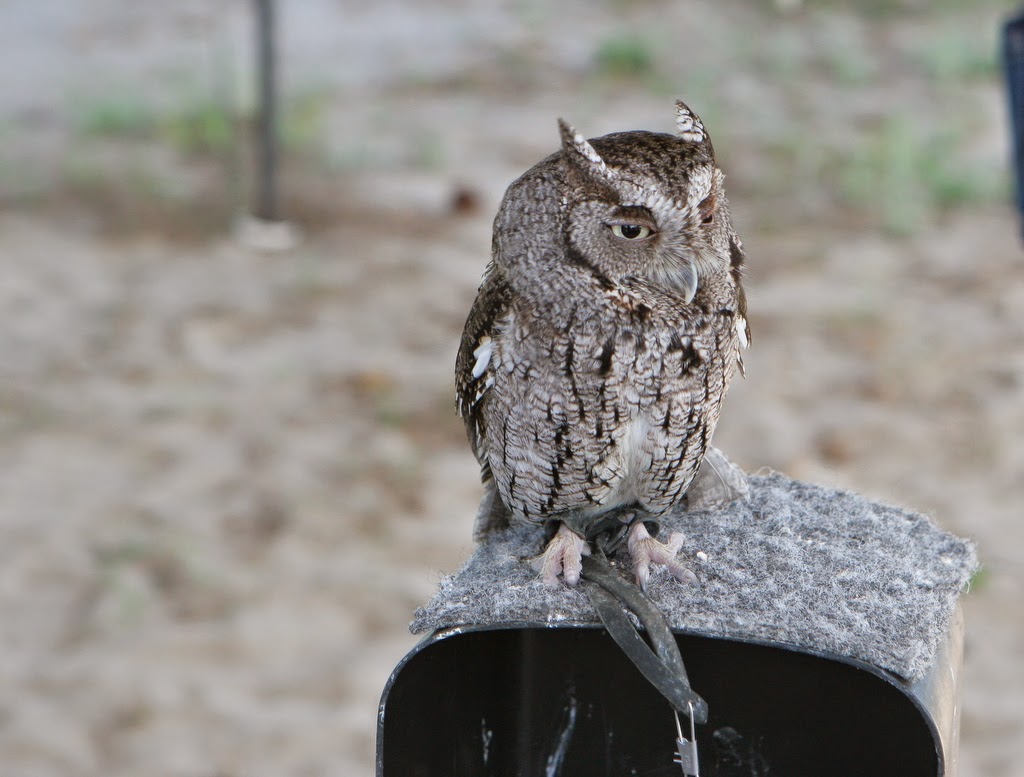 First, we met Lucy, an eastern screech owl. She is the type of owl that the book,
Hoot is based on. It is a great read-aloud book for the whole family.  Lucy lost
her eye after being hit by a car.  She would normally be a burrowing owl and 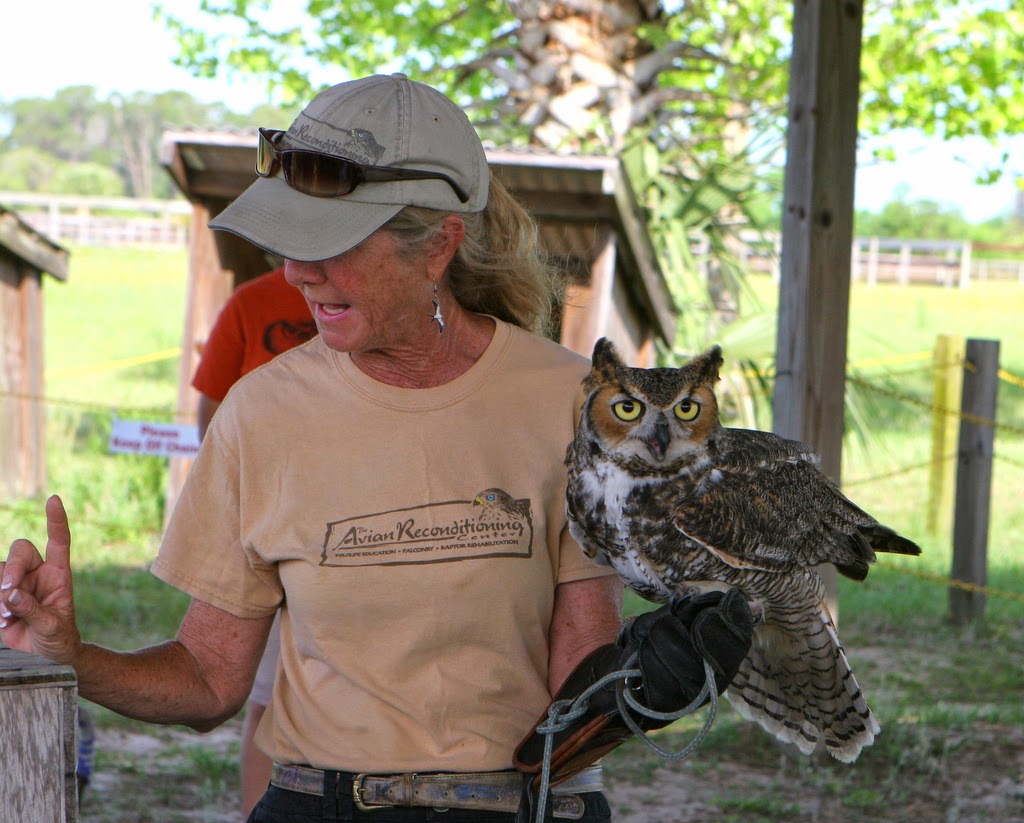 Gordon, a great horned owl was up next.  They are called the flying tigers of the
sky.  Great horned owls have fixed eyes and extra vertebrae in their neck so
they can follow their prey.  We have 7 vertebrae and the owls have 14.
Owls are nocturnal raptors, meaning they hunt at night and were created with
the extraordinary ability to see and hear at night. 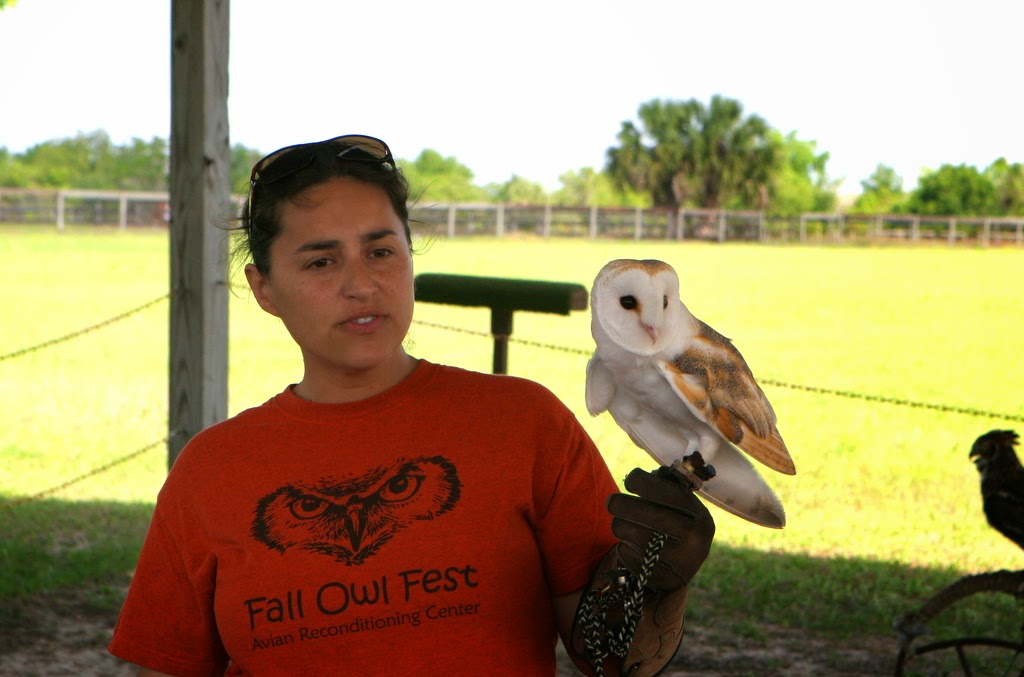 Henry, a barn owl, can hunt by sound so keen he can hear the heartbeat of a rodent.
Wow. Isn’t that astounding?  He can rotate his head 270 degrees.  Barn owls also
have 22 vocalizations that have been identified.  You may be hearing them in your

own backyard and not even know it! 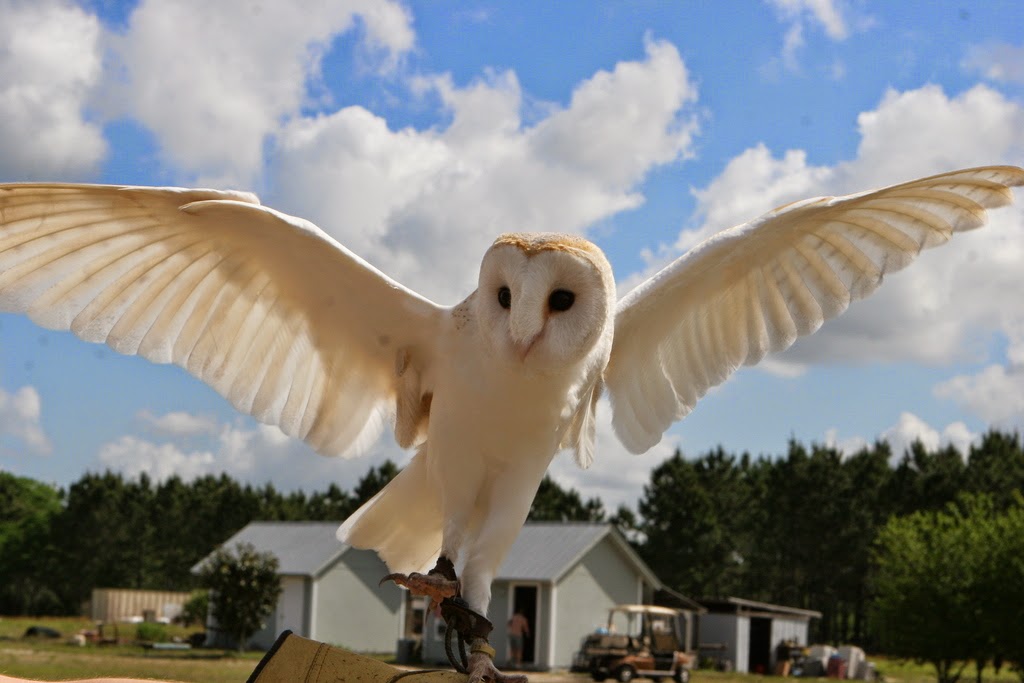 Owl pellets are a byproduct of the leftover fur and bones in the owl’s esophagus
after ingesting their prey. If you look carefully, you may find one under a tree on
a neighborhood walk or on a nature trail. I know for some this is disgusting, but

if you have the chance to dissect one, it is quite interesting. 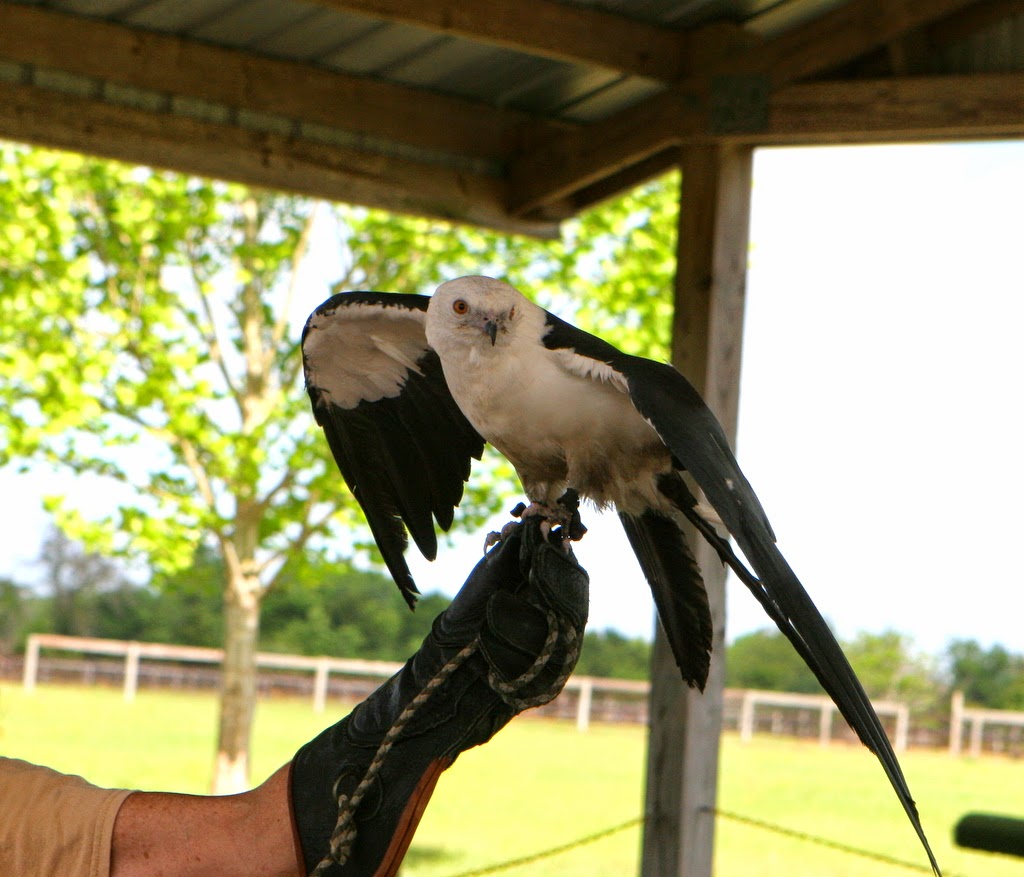 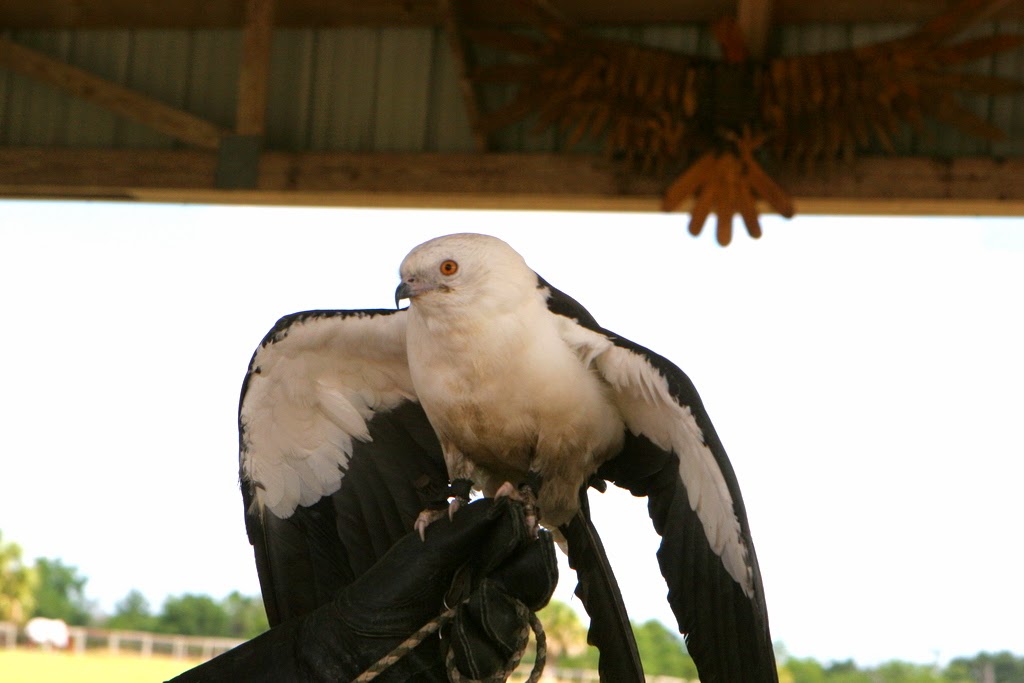 Swallowtail kites migrate from South America during the months of March and April.
They nest here in Florida and their young are full size in twelve weeks. At twenty
weeks they are ready to fly over the ocean and head back with their family to South
America. Kites “eat on the wing”, meaning they grab their food in mid-air as they

fly. They eat bugs, dragonflies and such. 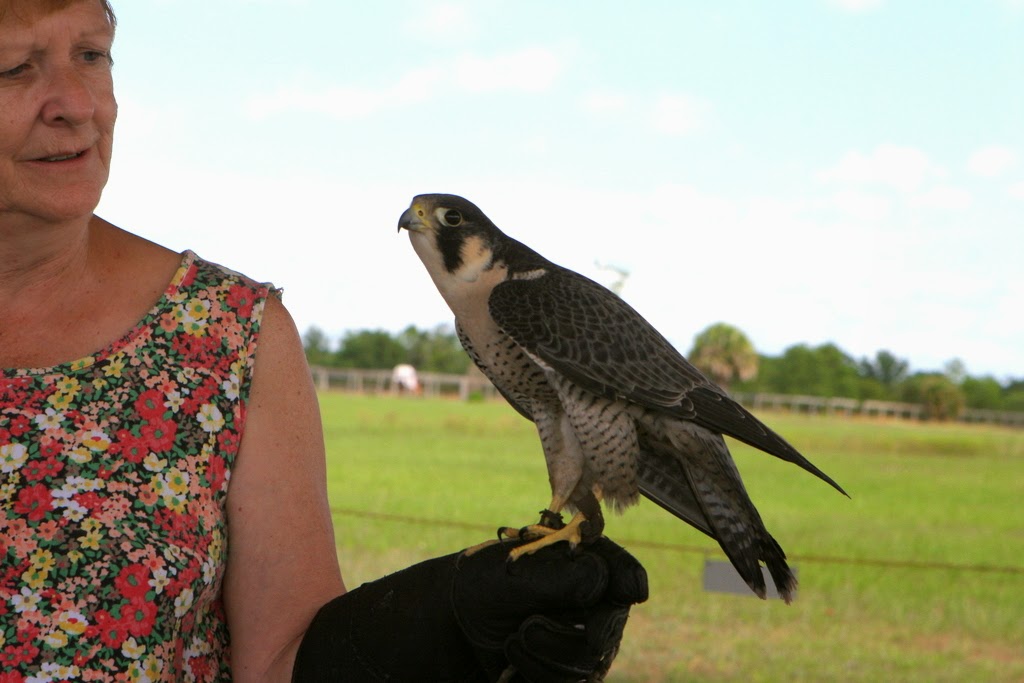 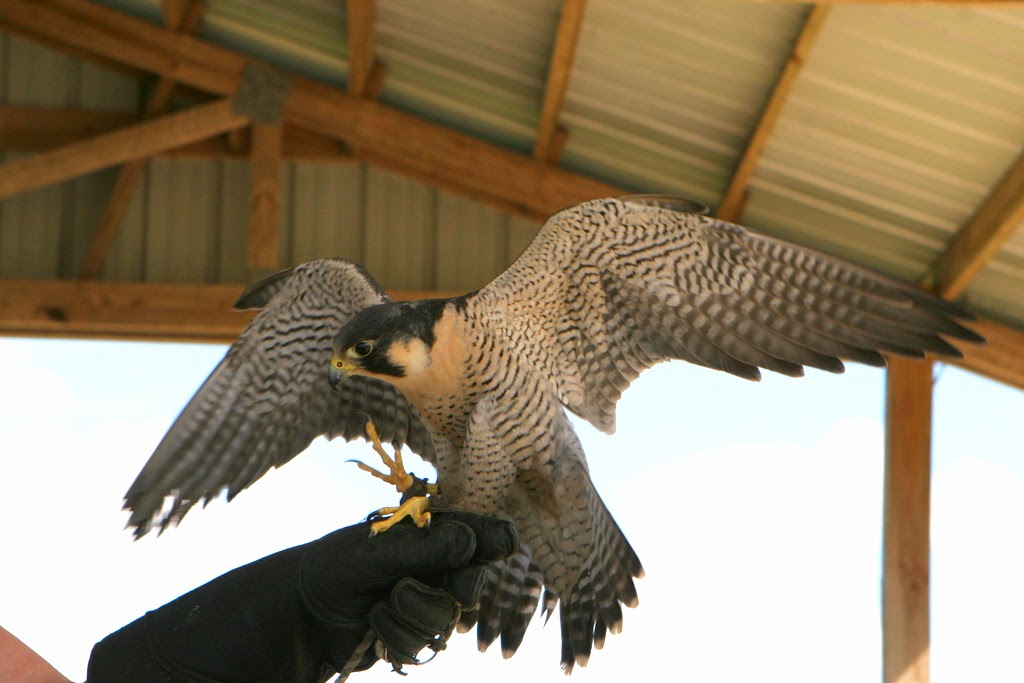 Peregrine Falcons have been clocked at up to 200 mph! They also eat on the wing,
and eat other birds. They have what is called a 3rd eye or the nictictadian membrane
that protects them in such fast flight. It is like a 2nd eyelid.  Peregrine falcons are

also used for hunting in the sport of falconry. 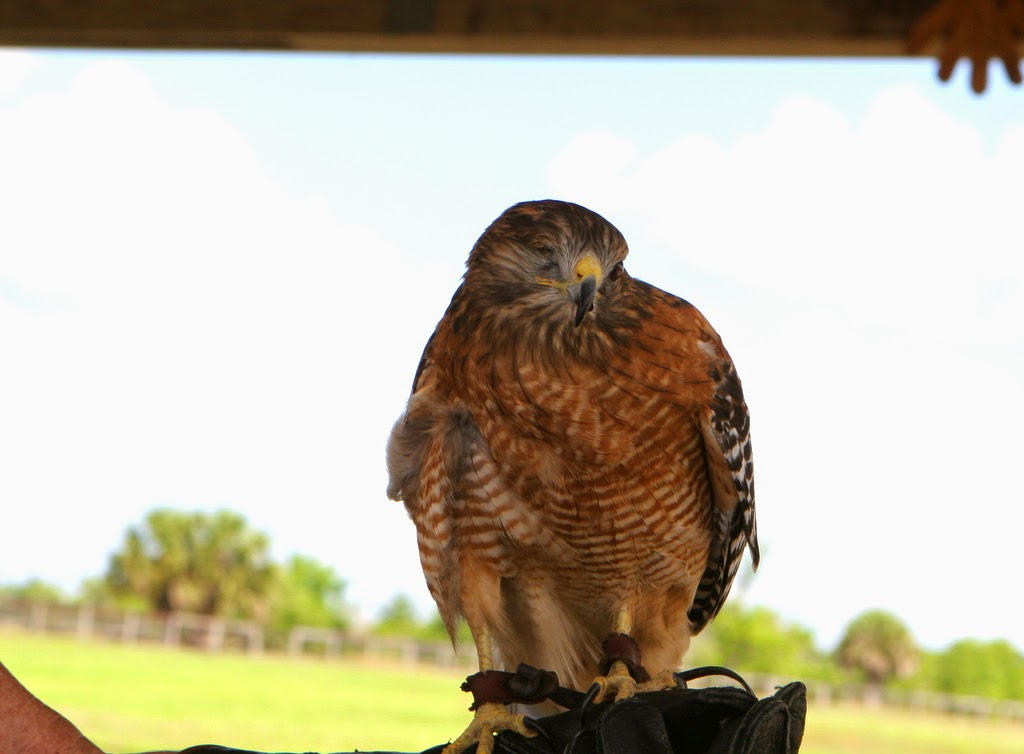 Piercy the red-shouldered hawk was blown out of a tree when he was a baby during
a storm.  He lost his eye and his back claw to ants as he laid on the ground.  Piercy
cannot be returned to the wild due to the eye of course, but the back claw is crucial

for birds of prey to be able to hunt. 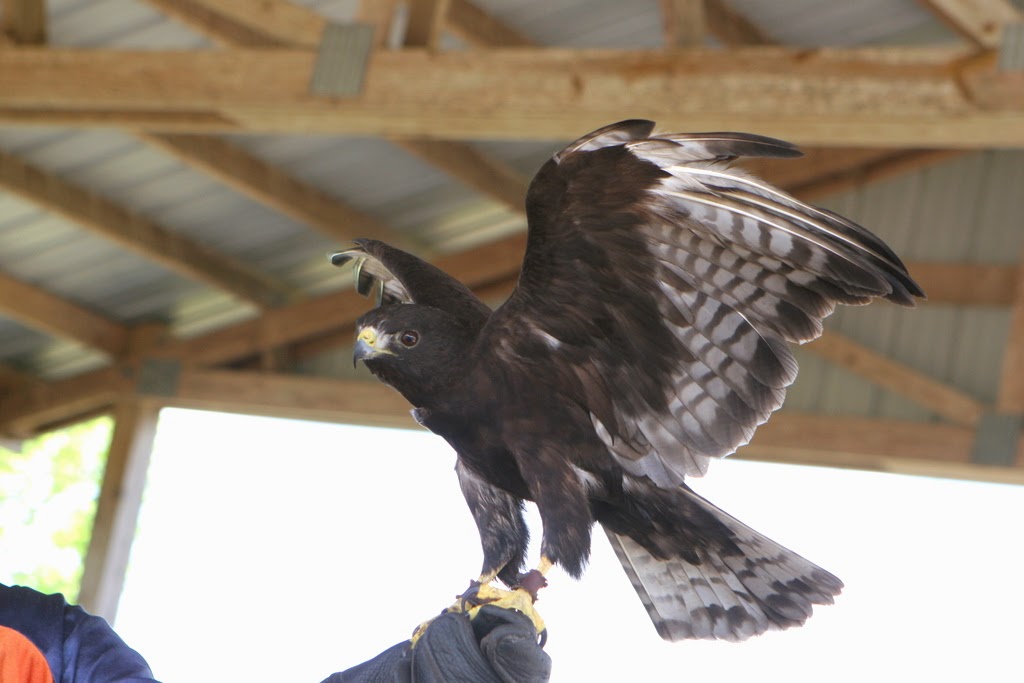 Our last visitor was Micco, a short tail hawk. They are reclusive in southern Florida
and Central and South America.  The Calusa Indians revered the short tail hawk.
Many of their tools and ceremonial staffs were carved with the head of the short
tail hawk. Micco was named after a Calusa Chieftan. 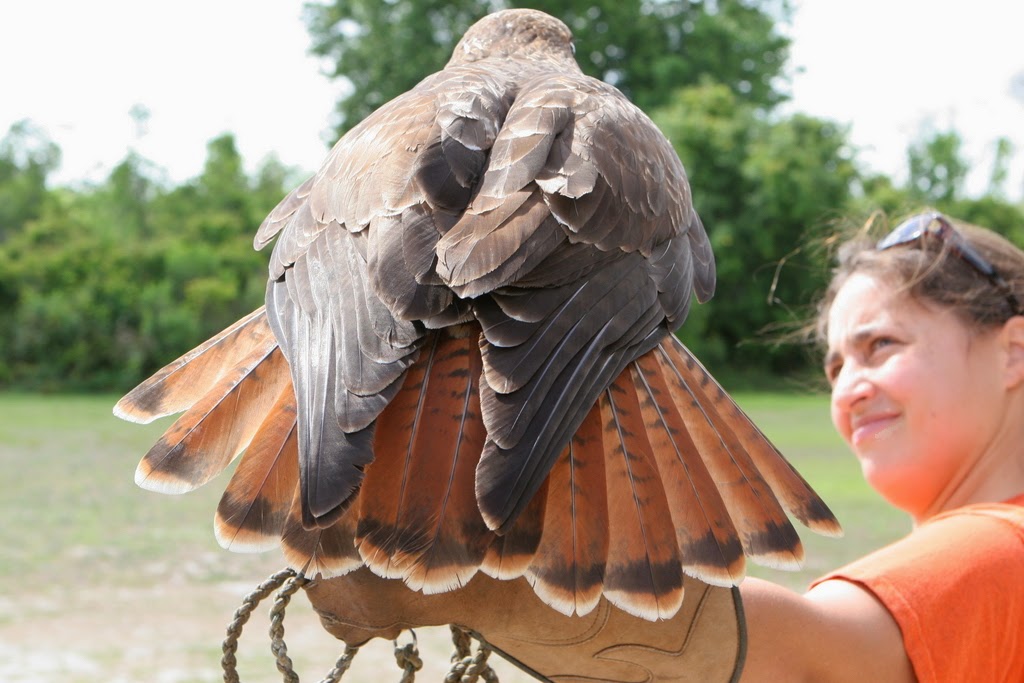 After our up close and personal encounter with these amazing creatures, Scott
delighted us with one last treat.  He flew his falcon and showed us how they hunt
birds in mid-air.  The falcon is outfitted with a radio transmitter to keep tabs

on him if he decides to take a joy flight of his own! 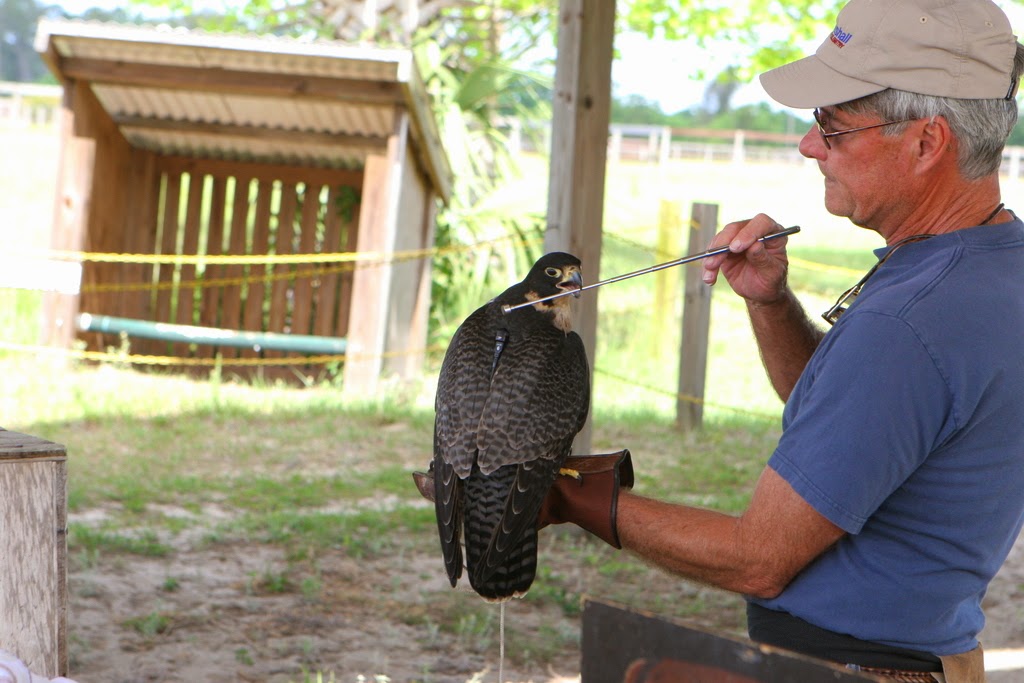 Scott attaches the meat of a quail to his tether. He gives the bird a few minutes
to fly around and then calls him.  He swings his tether and the falcon dives

for the meat, then takes it down and eats his catch.  So AMAZING! 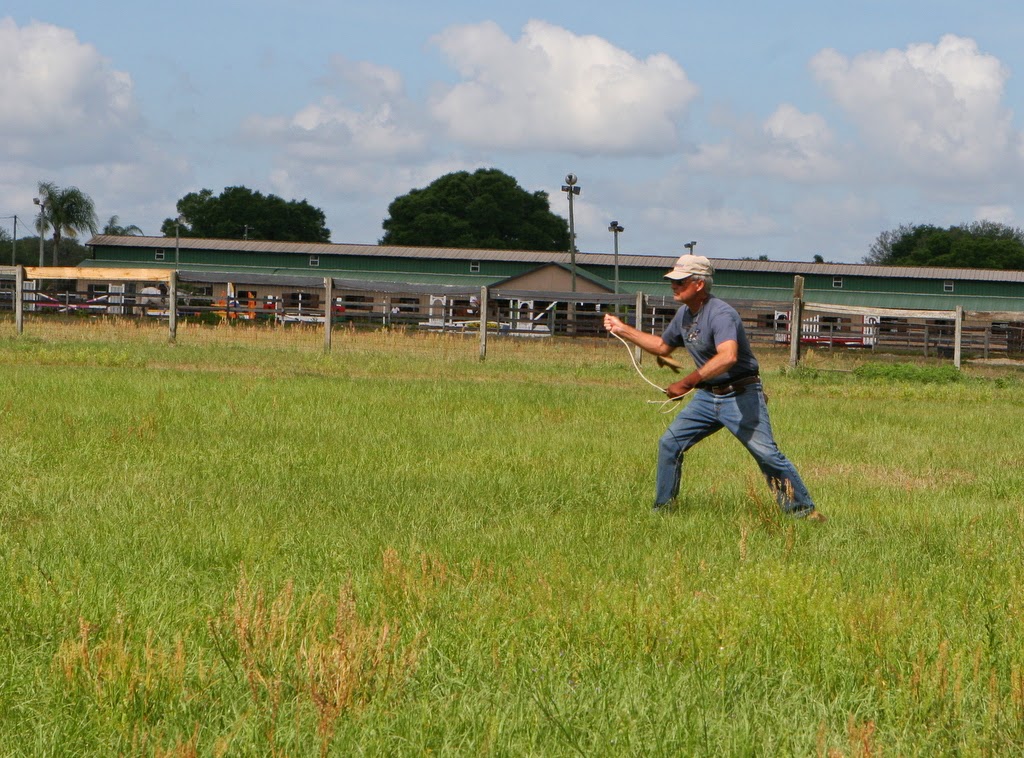 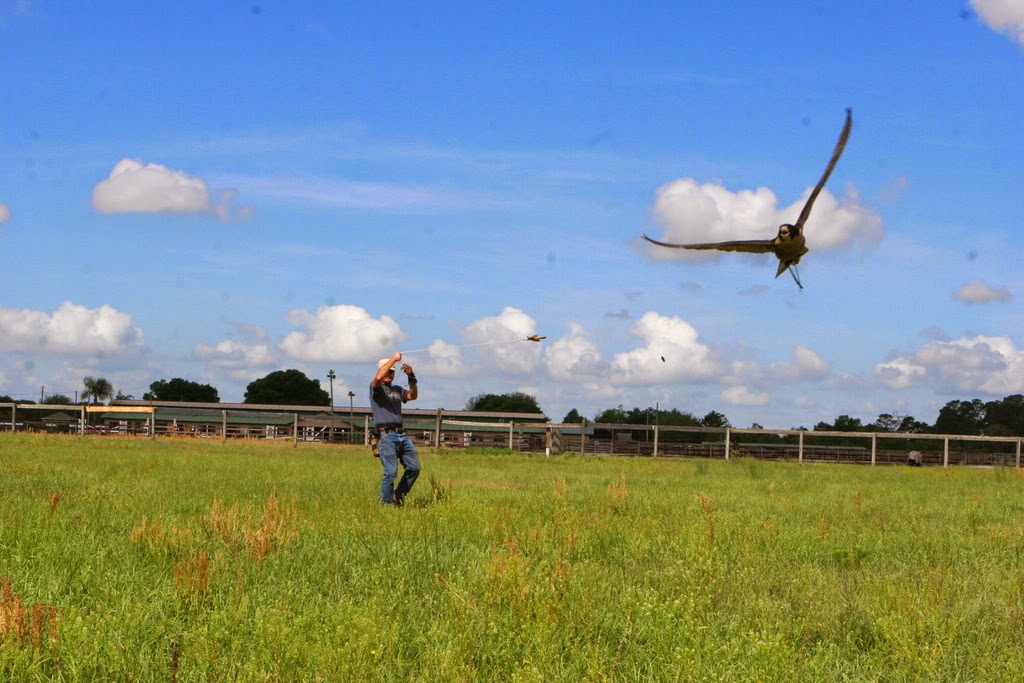 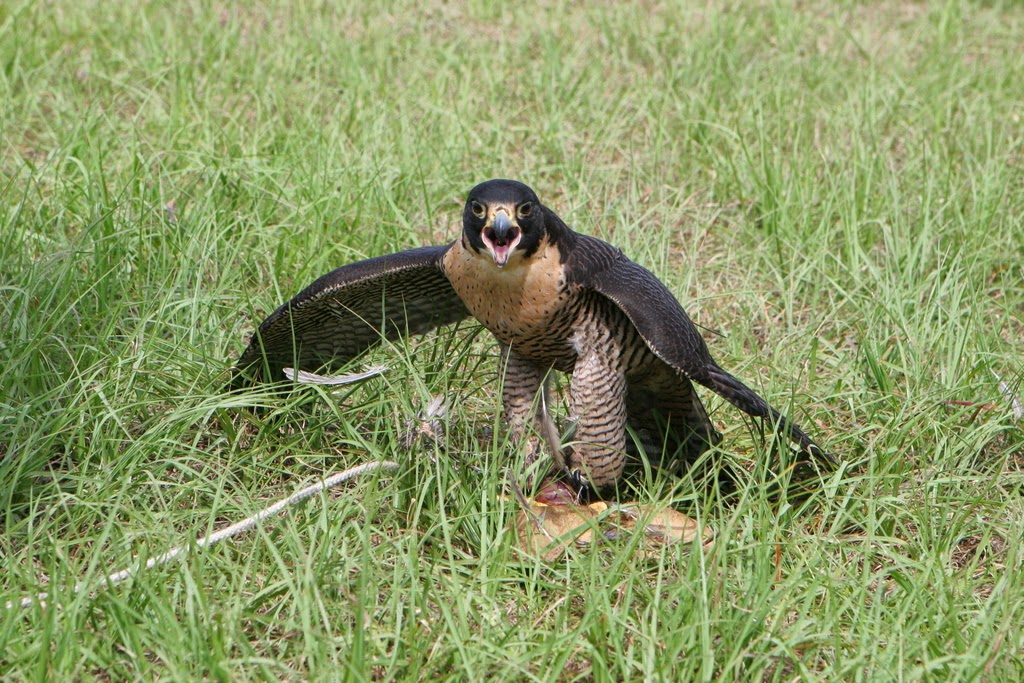 He was so fast I could not catch it on video until he landed!

Check your area to see if a treasure like this is waiting to be explored by your
children.  Learning from others who have a passion for their job makes it
all the more concrete in their minds.  Education, blending with real-life learning
is the best way to go, even if you experience it without your kids as I did!!
Share
Share
Follow