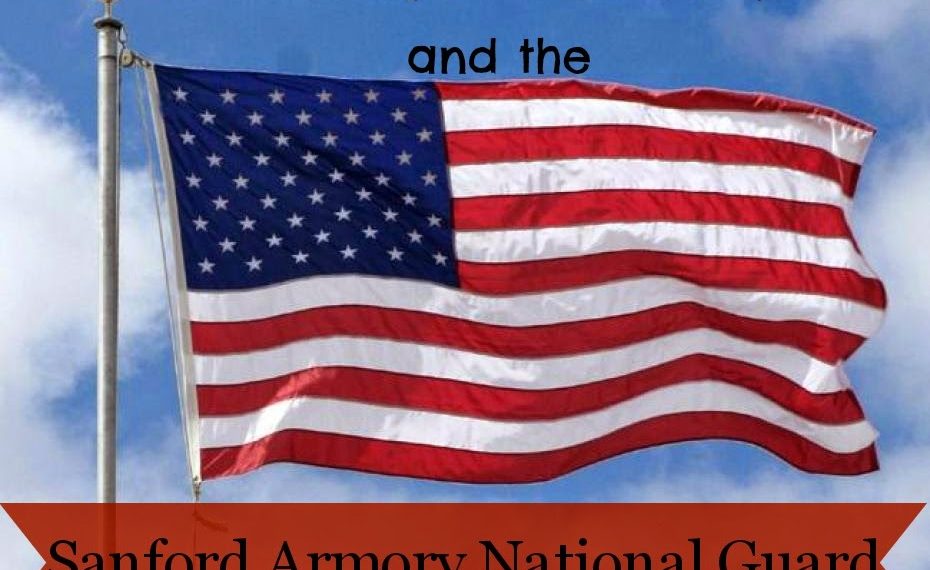 We met up with a few families to tour the Sanford Armory last week.  The
sergeants told us they don’t really do field trips, but would give it a whirl.  By the
end of our tour, my boys decided this was the BEST field trip ever!
I am ashamed to tell you that the armory is less than 10 miles from my house
and I didn’t even know it was there.  It is across the street from a popular park
and has a good view of Lake Monroe, I still don’t recall seeing it.
The building looks to be sixty plus years old with towering stairs to the entrance
and is completely surrounded by a 12-foot fence.  Once inside, it was nothing
special, but the people this armory employs makes it awesome.
One sergeant began our tour with the drill room and put the kids at attention and
into formation.  Have you ever seen homeschool kids try to form a line?

It is like herding cats at a dog show, impossible! 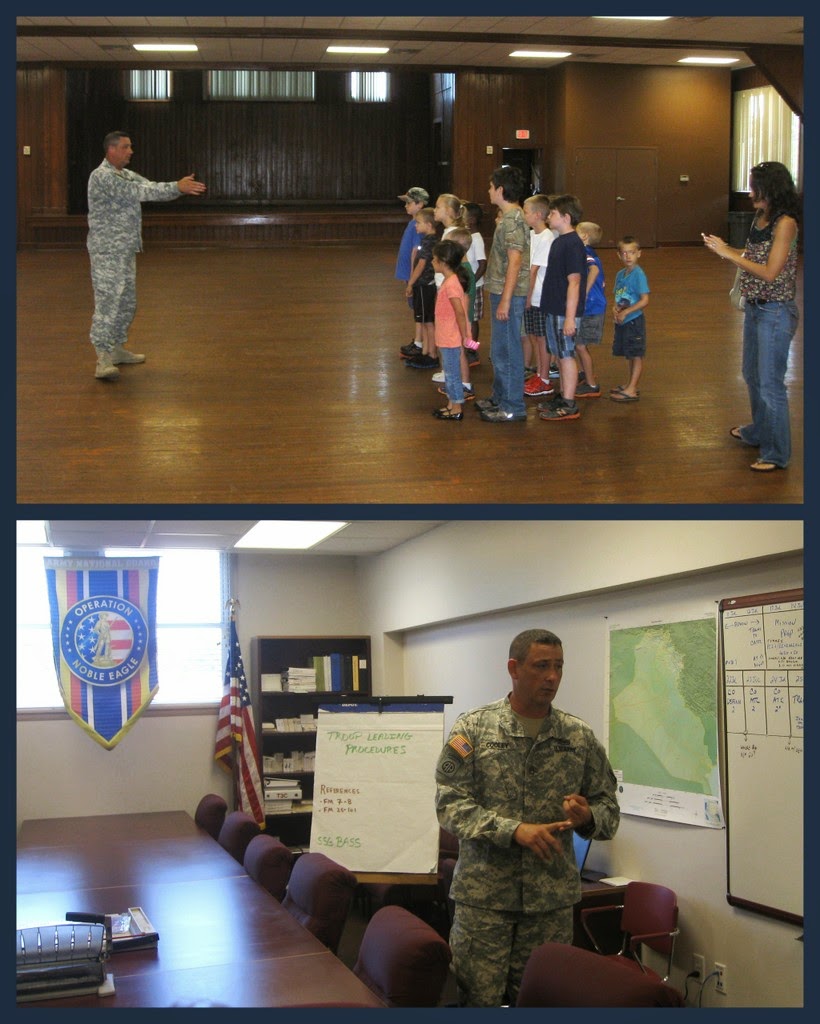 Next, we went to the meeting room.  Here they discuss training schedules and camp
plans.  They have a big training coming up in July and had all the codes and
schedules on a large whiteboard.  The sergeant described it to the kids as three
weeks of camping without showers and blowing up things.  All the boys’ eyes lit up!
Showers are a battle in my home, how about yours?
We then went outside to the vehicles they use at this facility.  The first is the
“water buffalo”, it holds 400 gallons of water and on deployment to camp the 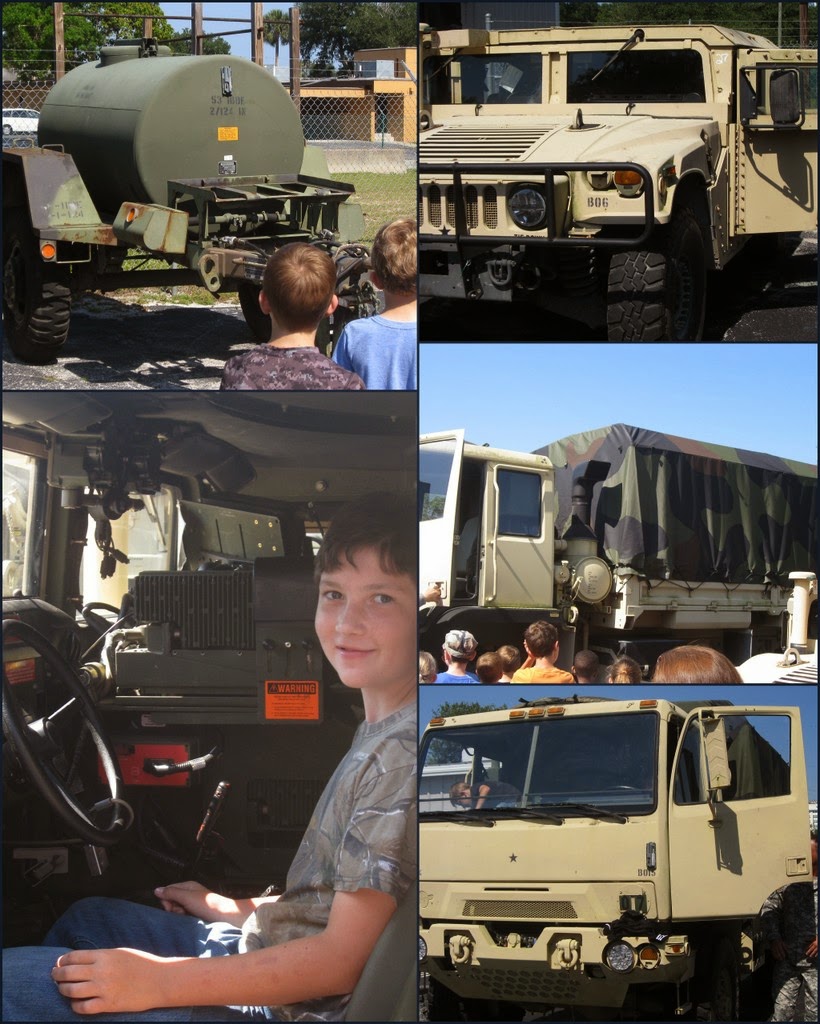 The armored Humvee is a 6.4-liter diesel turbo that weighs 2 1/2 tons.  The doors
weigh 600 pounds each!  This vehicle can withstand an attack of any kind except
an AT4 attack ( like a bazooka made to destroy tanks). It can even go into
5 feet of water!  Crockett thought this was a perfect outdoorsman vehicle!
The last vehicle we inspected was an LMTV like you saw on the show MASH.
Is that giving away my age?  Anyway, 17 men can fit in the rear and 3 in the front.
It has a turret in the cab for a machine gun and can go 500 miles on one tank.
Cowboy thought the air tool hookups on the front were cool.  The soldiers can
hook up any tools for air compression on the front grill. Awesome.
Our tour concluded inside with night vision goggles, gas masks, and guns.

We were in boy heaven. 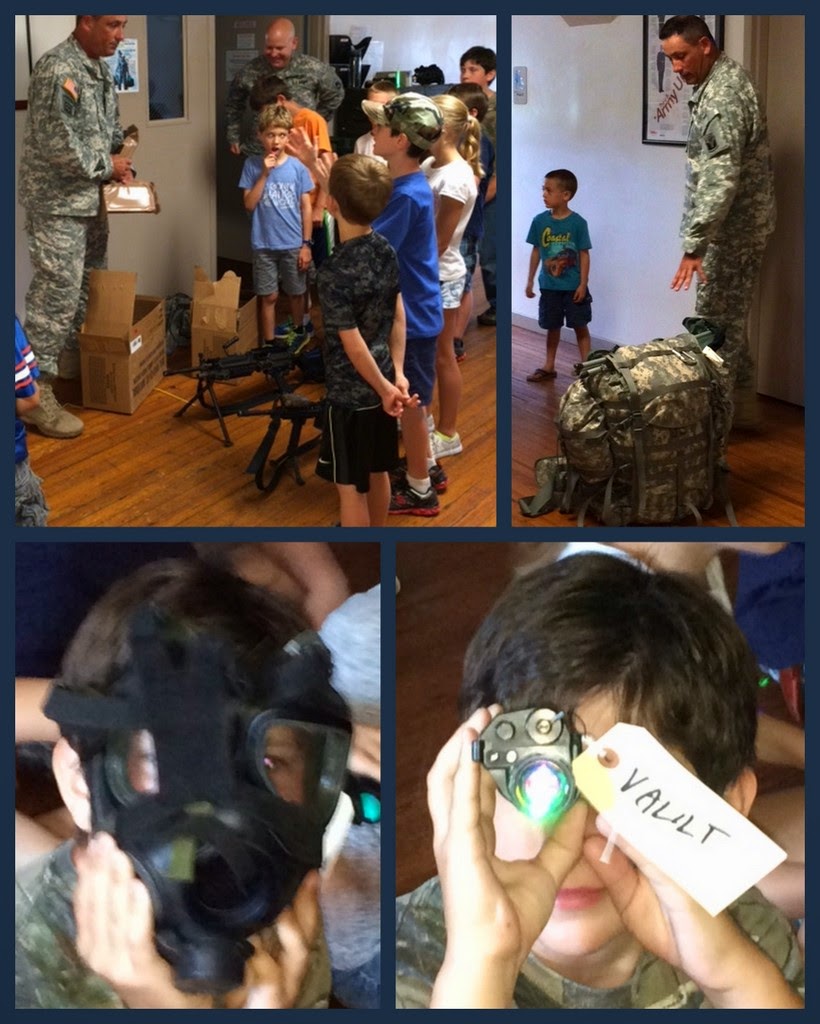 After we wrapped up and gathered around the two sergeants for a final talk,
the children were so excited about all they learned about the National Guard,
their duties to the President of the United States and to the Governor of Florida.

Not to mention all the awesomely cool stuff!! 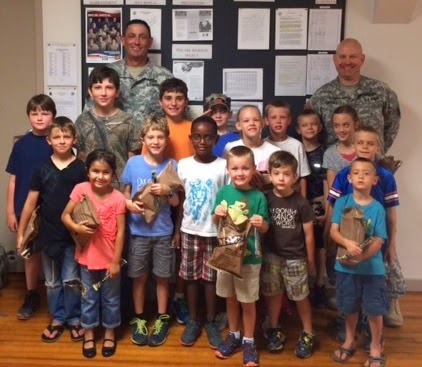 The sergeants we spent the morning with were very big guys by.  Full camo
uniform, heavy boots, buzz cut hair, clean shaven and slightly scary to little kids.
However, when they began telling us why THEY chose the military, they softened.
The sergeant told the children that entering any area of the military was a serious decision,
they MUST choose for the RIGHT reasons.  “What reason is that?” asked a mother.
“Love your FAMILY with all your heart, love your COUNTRY with all your heart”
Believe in what this country is founded on,
FREEDOM     JUSTICE     LIBERTY
As I looked around at the parents, we all had a lump in our throat, we were in
awe, inspired, thankful.  This man has chosen to serve his country for 28 years,
his truth is still as powerful for him today as it was many years ago.
He has chosen to lay down his life, if duty calls, for me and my children, I am GRATEFUL.
As we all said our goodbyes and left the building, I could feel the power of his words
resonating with all the parents, even some of the older children.  We had witnessed the
power of “love of country” within the walls of that obscure building, that I never noticed
before.  As we went toward the gate to exit the area, I looked up at the
American Flag waving in the breeze, I never felt more proud to be an American,
Land of the free, home of the brave. 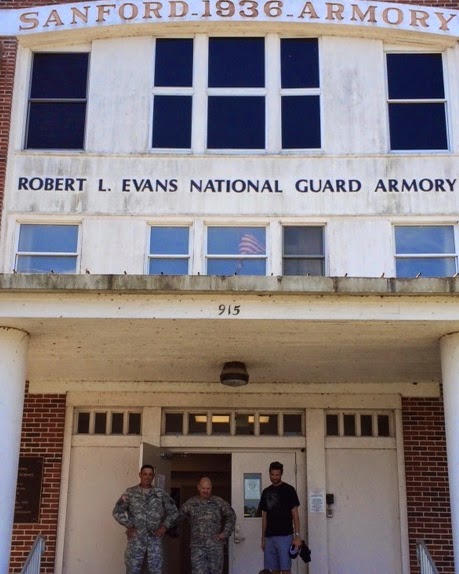 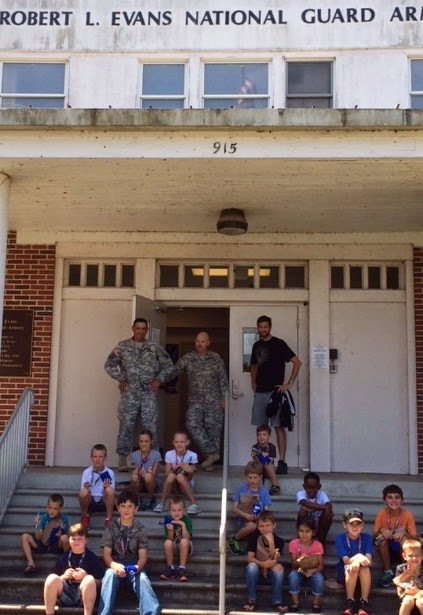 And the future citizens we are raising up today!