What Backing a Trailer Taught Me 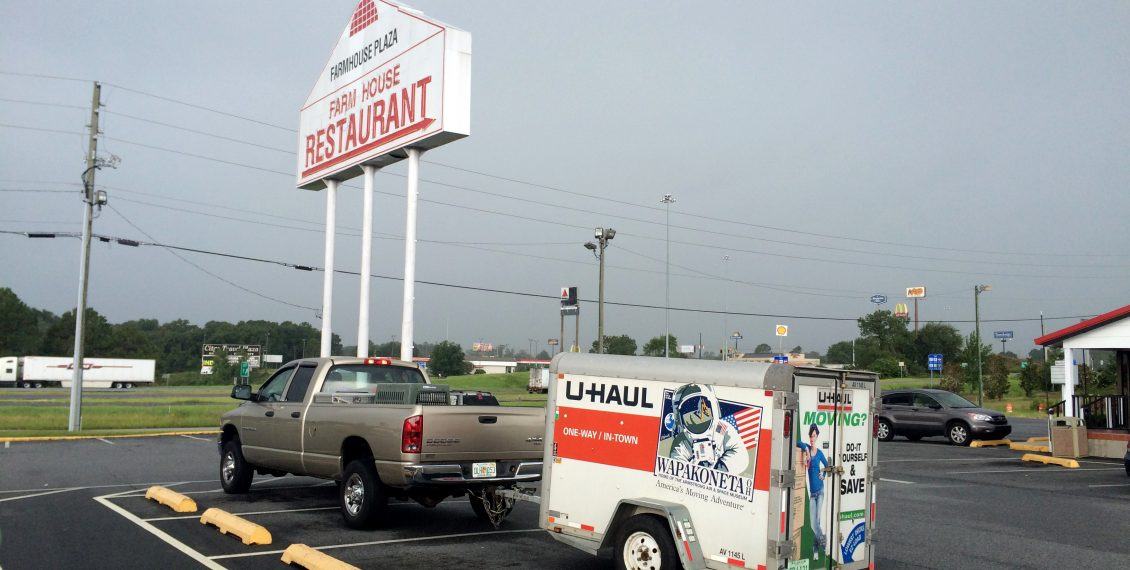 Backing a trailer is not part of my skillset. My husband, Curtis seems to think that it is time for me to learn since we travel with one each summer. Our trips to conventions are more frequent and so are the odds something will happen on the road and he will need my help.

Curtis decides it today, right now. Backing a trailer was more important than cooking dinner. I shut the stove off and put my shoes back on. I have learned that Curtis is a spur-of-the-moment kind of guy and after 22 years, I roll with it.

We begin with the hitch. My oldest son takes me to the back of the truck and begins to explain clear as mud.“This do-hickey hooks here and at the same time you hit that knob so the trailer coupling falls onto the ball. But don’t get your finger in there because it will cut it clear off, got it?” He goes on, ” Now, you give Daddy this signal with your finger so he knows to move forward a smidge. Don’t give this kind of signal which looks like the other or he will run over your foot. Release this what-not so it goes in that hole, not this hole, that hole. Ya with me?”

Sure thing. I have decided at this point the only thing I feel comfortable with is looping the safety latch and possibly forbidding my children to get near that hitch-do-hickey thing until they are adults.

Curtis told me to get behind the wheel of the truck, pull up the drive and head down the road. I may have forgotten to mention that he drives a big diesel long bed truck that is difficult for me to maneuver without a large rectangular road hazard attached to it.

The long straight drive was a breeze. Then I had to turn left or right. Curtis says “You have to start way back and swing-out, circle round, and cut back quick. Then pull forward.” At this point, I am beginning to think there is some trailer-slang language that requires a manual before I can really grasp what I need to do. Curtis looks at me like I should be fully engaged in the “swing out” about now and why I am not following his direction to the letter.

I swing out, narrowly missing my mother’s crimini lily bush with the trailer tire, just in time to “cut back”  to prevent sideswiping the mailbox across the street. I began to get a bit irritated and asked, “Why would you just throw me into this where I could hit something or block neighborhood traffic!” Curtis replied that you just have to do it to learn it.

I headed on a few miles toward a nearby park with a wide open field. My confidence was building that maybe I could do this until we hit the main road at 5 o’clock traffic. I needed a wide berth to swing out and cut back into oncoming traffic without cutting the corner and letting the trailer slide into a culvert.

My stomach began churning. Fortunately, the oncoming vehicle must have seen through the windshield this wide-eyed woman, grasping the steering wheel for dear life, because he stopped way back to prevent oncoming cars so I could make a break for it. I only rolled one back wheel over the top of the culvert. Tragedy averted.

At the field, the boys and Curtis jump out and set up cones like it is the DMV or something. I made it this far, fully impressed with myself, so how hard could backing a trailer be?

Curtis comes to the window and says “Now there is a saying that helps some people. It doesn’t help me so I don’t need to tell you unless you just want to hear it.” Well, of course, I wanted to hear it. I like riddles for memorization and chants to help me through. I like to see things in action before I can do it myself.

The saying was “Turn toward the problem”. Now I know there must be a manual I could check out at the library to understand this trailer slang that seems to confuse me so.

Then Curtis says to back the truck straight back and park the trailer between the two cones. I look in the rearview mirror and decide this will be a piece of cake. Straight back. No turning necessary.

WHAT? I had enough of this slang. I did not know what on earth he was talking about. No one told me about a part called jack or knife or that it was such a big deal! 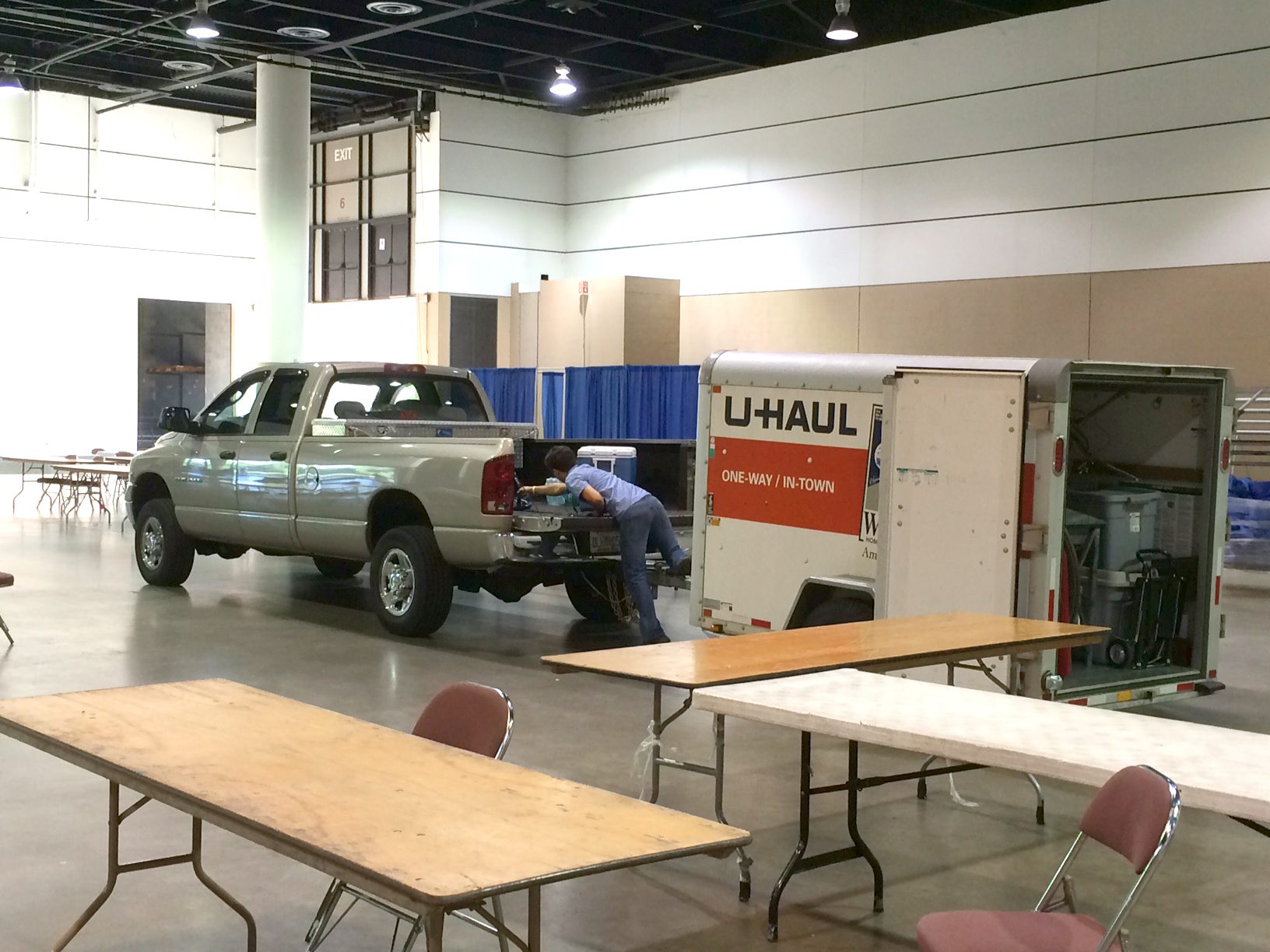 Curtis runs up to the window and says, “you can’t do that! you don’t cut in left when the trailer is going left like that!” To which I replied, “Turn toward the problem, going left was the problem.” His confused look and head-shaking told me that saying had more than one meaning. He said “Well, yes, but then if it goes 90 degrees you go forward and back again, not turning toward the problem. Can’t you just do it and figure it out?”

For the next fifteen minutes, I made a lovely figure-eight, ran over the boys’ football, made up my own trailer slang, and parked that whole mess about 10 feet from one cone-headed in the wrong direction. Then I threw it up in park and crawled over in the passenger seat. That was my non-verbal riddle that I was ready to go home.

Curtis and the boys loaded up in the truck. Curtis turns to me and says ” Well, I guess it is going to take a few times for you to understand how this works. You must learn differently than I do.”

As we rode home with the setting sun I realized how different our learning styles were. Frustration can be the emotion of choice when someone doesn’t understand our explanation of something. Understanding that we each may have different ways that help us learn best is often forgotten or misunderstood.

I thought about our children and how each may be wired a bit different from one another. Even though they are growing up in the same house and schooling together. We may not know right away their best way to learn. It takes time, trial, and error.

I am not sure I saw it that way before our “backing a trailer” fiasco. I went into it with a willingness to learn. Curtis went at it will a desire to teach, yet we struggled to understand each other.

Maybe this is what happens in our homeschooling when frustration takes place of patience. I have since approached teaching my boys with a desire to teach, but am allowing space for their willingness to present itself in the way they need to be taught. It has taken us more time in our school day, but the results have been more positive behaviors and feelings of accomplishment.

If you have any advice, riddles or a trailer-slang manual I can borrow to master backing a trailer I would appreciate it. I have a long way to go to be ready for our next road trip and backing a trailer.