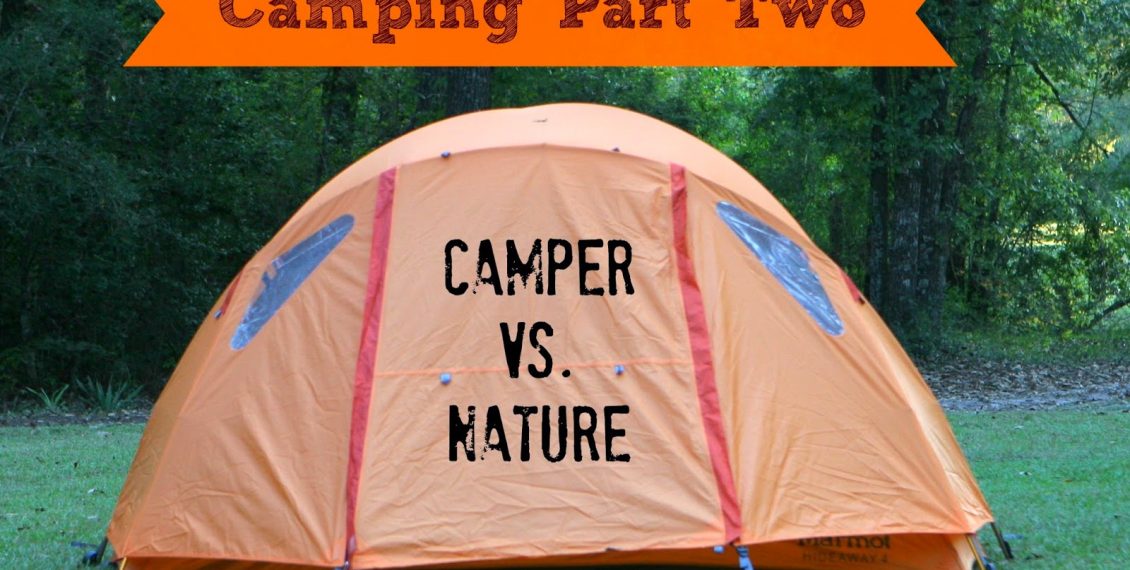 As we head out this weekend on another camping adventure, I thought I would continue our adventures from last year. In part one of camping, I talked about the truth of family camping. Now I will share our run-ins with critters and nature as we venture on exploring Fort Desoto in Florida.
This time last year we ventured down to Fort Desoto, Florida with five other family members to tent camp.  This place was amazingly beautiful.  It reminded me of the old photographs of all my grandparents’ camping trips in what I would call “Old Florida”.  The palm trees, palmettos, white shell roads, bicycles, and fishing poles were everywhere. We were so excited about our trip. 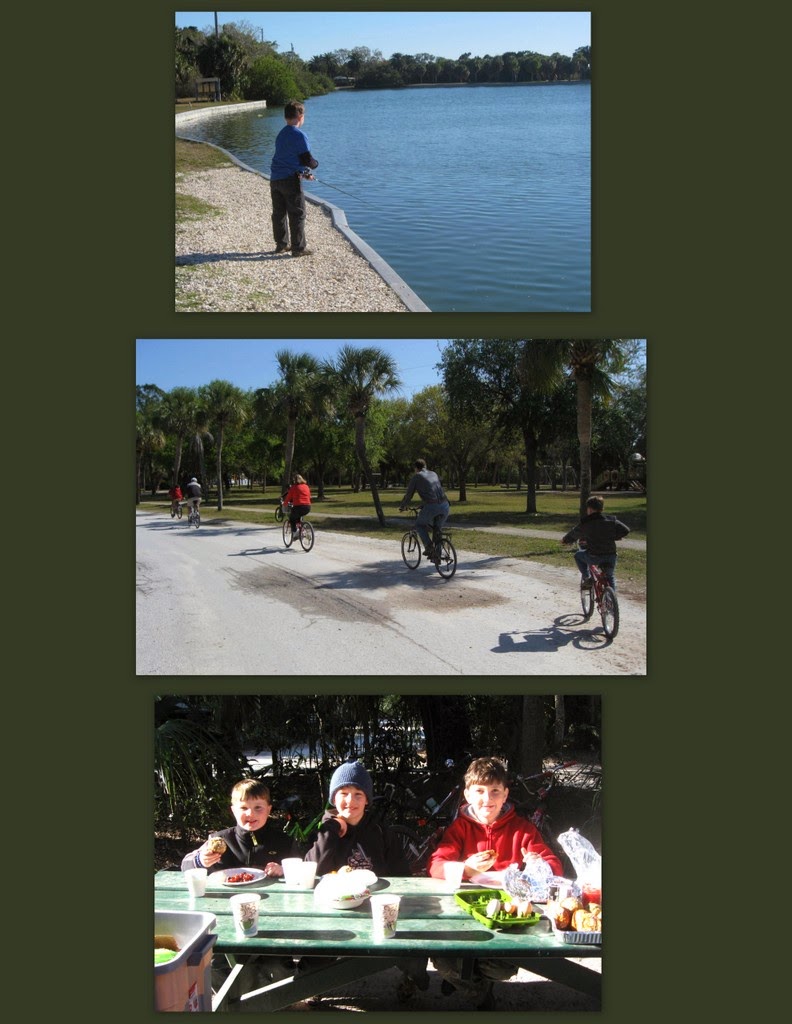 We could see the canal from our site that led out into the bay.  You have to make reservations here at Fort Desoto 5 months in advance and they were full.  We had two sites, one for us, and one for my sister and brother-in-law.  My mother and father-in-law were staying at a nearby hotel.  Apparently, they gave up sleeping in a tent years ago.  I teased them about it, but by the end of our trip, their cozy hotel room was looking quite enticing.
Tents were pitched, dinner was cooking and a fire was made, it was beginning to look campy and cozy!  I had everyone’s beds set and got our food situated in the truck.  We were actually on a coastal island, I didn’t think there were bears, but maybe a critter or two. Then, the air seemed to turn mighty cold, and a fierce wind blew every now and then. Hmm….
[thrive_leads id=’3257′]

As we settled around the fire, we noticed that all the other campers were closed up for the night, not anyone out, no fires or chit-chat. It reminded me of a story my grandparents tell of the skunk-infested campsite.  Then we heard pitter-patter.  Up in the palm trees above our heads were full of raccoons!  They were chattering at each other and coming down for our marshmallows.
We began trying to chase them away, but they came from all sides! They were a strange blueish grey color and they did not seem to care if we were there or not! They surrounded us. My boys began pelting them with acorns to get them to go away. Just when we thought they were gone, they appeared again.  We all put the food away in the vehicles and made sure we didn’t have anything with scent going into the tents. 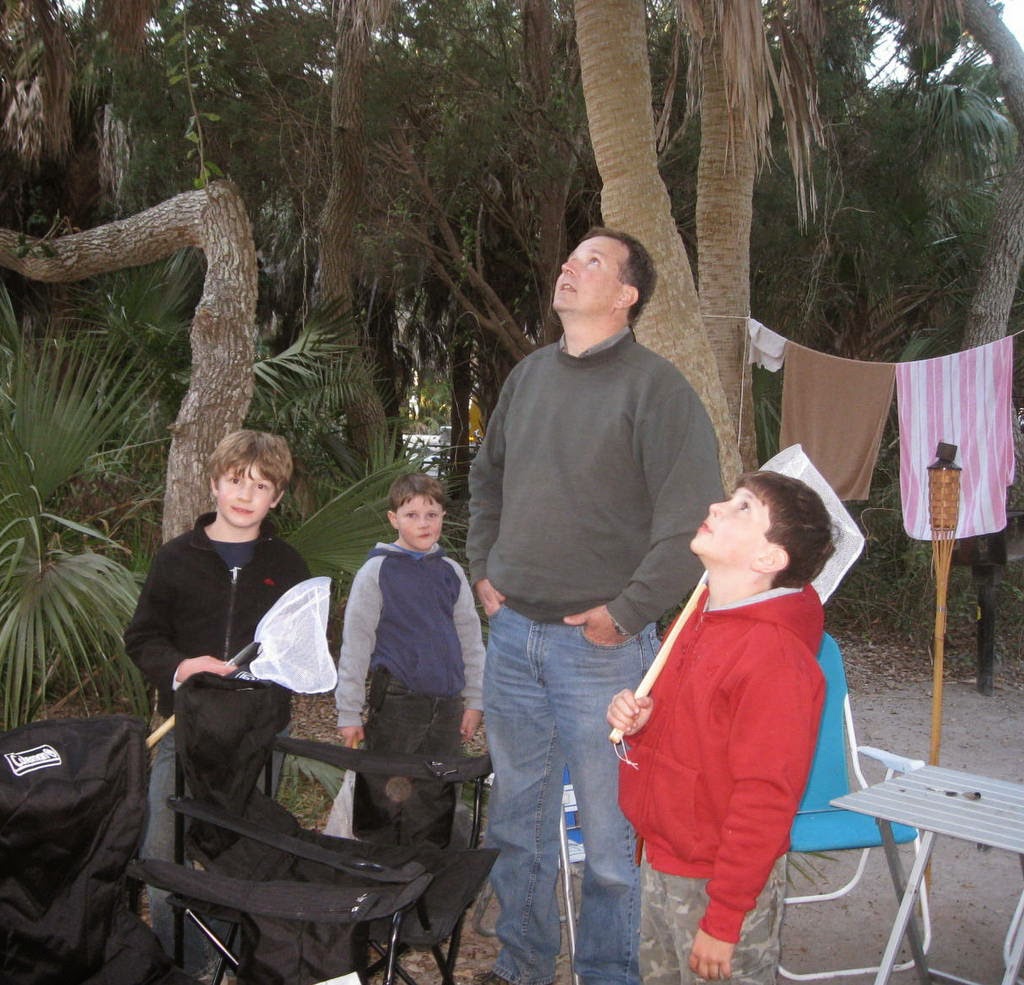 The bait and switch

I went into our tent to change clothes when I noticed all of our stuff scattered everywhere.  Dirty footprints on our pillows and my backpack was gone!  Had we been robbed? I found my backpack outside ripped open and my medicine bag was gone.  This was crucial because Grant has allergies and an epi-pen is necessary.  So, everyone went off in the dark,  looking for the medicine pouch. It was found in the woods, torn a little and my Advil was eaten.  The coons must have had a headache from eating the homemade granola bars that I left in my bag.

We all claimed to have closed the tent, but someone had to have left it open.  After all the mess was cleaned up and the fire put out, we went to bed.  Grant was sleeping next to me, with his head at the back door of our tent.  He and I tend to have chapped lips in windy weather, and he had just picked out a new lip balm for the trip.  He had lathered up his lips before bed, then we put the balm in the truck for safekeeping.  About thirty minutes after lights out Grant kept saying someone was unzipping the tent at his head.  We assured him it was nothing, no one could get in. He kept saying he heard something, so I sat up, and sure enough, I did too.  When I looked,  the tent was unzipped a little way.  Curtis went out of the front door and saw a raccoon around our tent.  He chased them off, but apparently, their lips were chapped too!

Poor Grant tossed and turned all night, and come to find out he was afraid to sleep because he thought the raccoons were after his lips!!!! 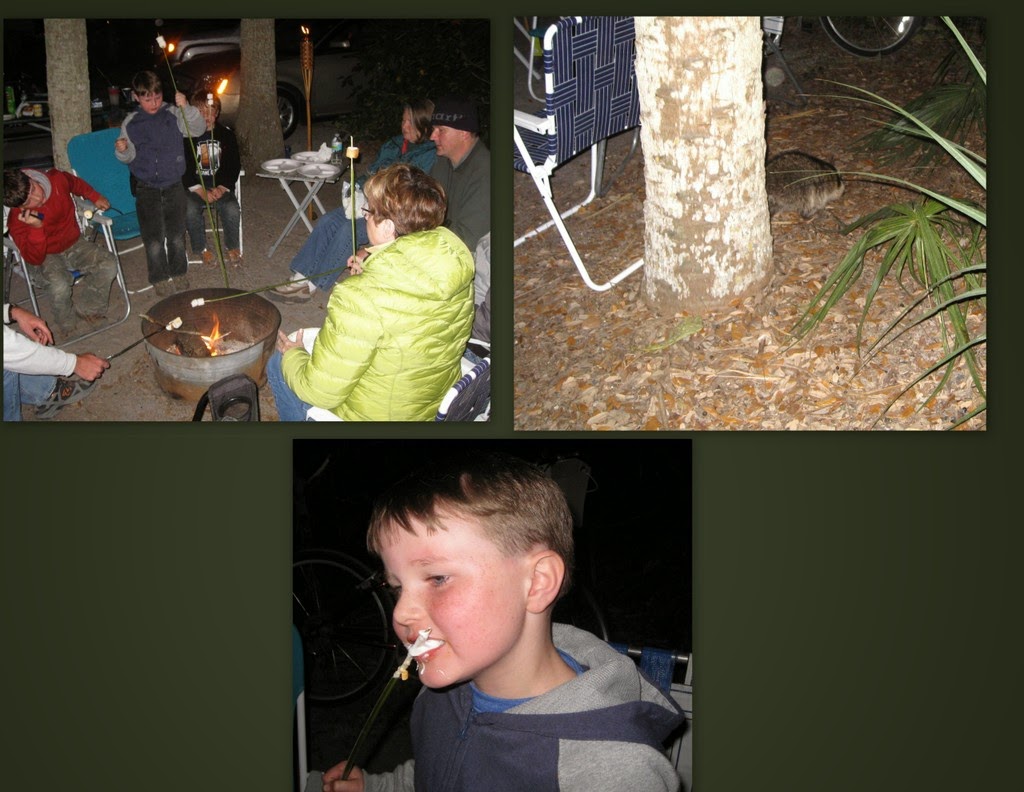 That night the temperatures dropped to about 42, now I’m sure many of you laugh at that, but for Floridians in a tent, it’s cold. The north winds picked up and it was too cold and windy to swim, boat, fish, kayak, or generally do all the activities we planned the next day. So, we biked to the fort and learned some history.

We also visited Fort Desoto National Monument. This may be one of the best “little” national parks we have visited.  A beautiful coastal walk on a shell path was where conquistadors landed and Native Americans fished for their supper.  A large Gumbo Limbo tree was the focal point for the museum, I had never heard of or seen one of these before, interesting. The boys earned one more badge for their Junior Ranger collection, and we visited a reenactment event. 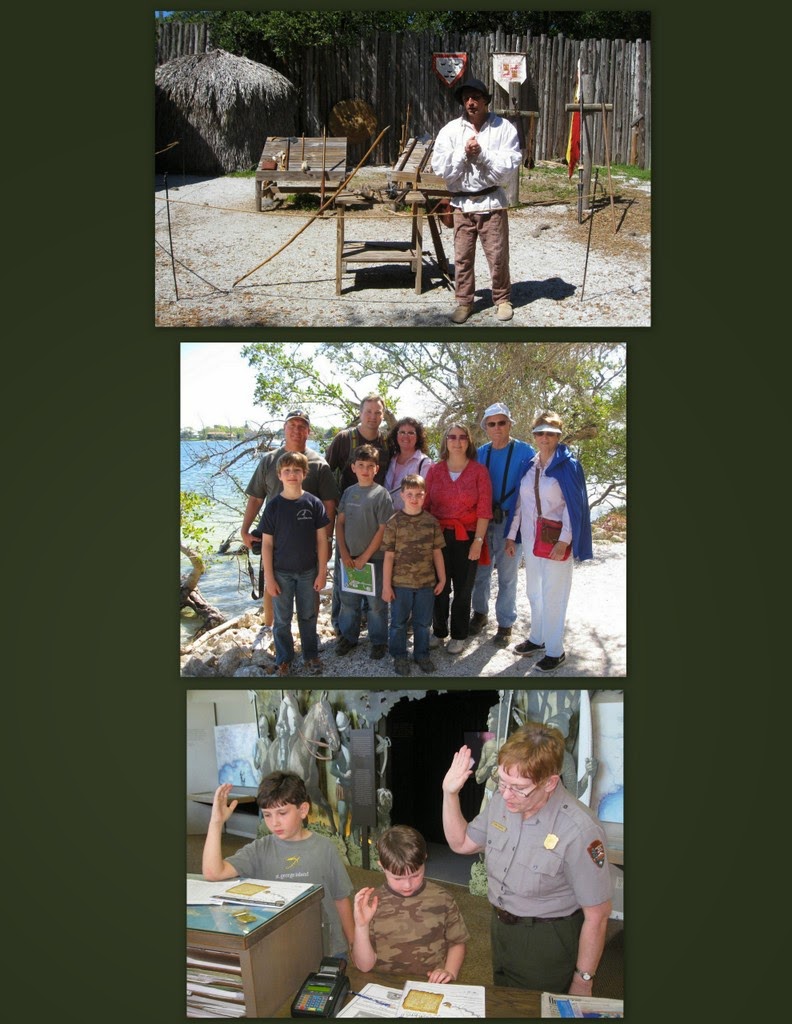 As we closed another camping day, the wind and chill gained speed.  We turned in after a campfire meal and hoped the next day would fair better weather for our outdoor activities. As we fended off raccoons and tried to put everything away for the night, we heard skirmishes at our tent again. Upon investigation, Curtis found Grant’s pillow halfway outside the tent in the back.  Apparently, the crafty animals have figured out how to distract campers while another team unzips tents and hauls off with anything they can get. This time they were in need of a pillow to sleep on! 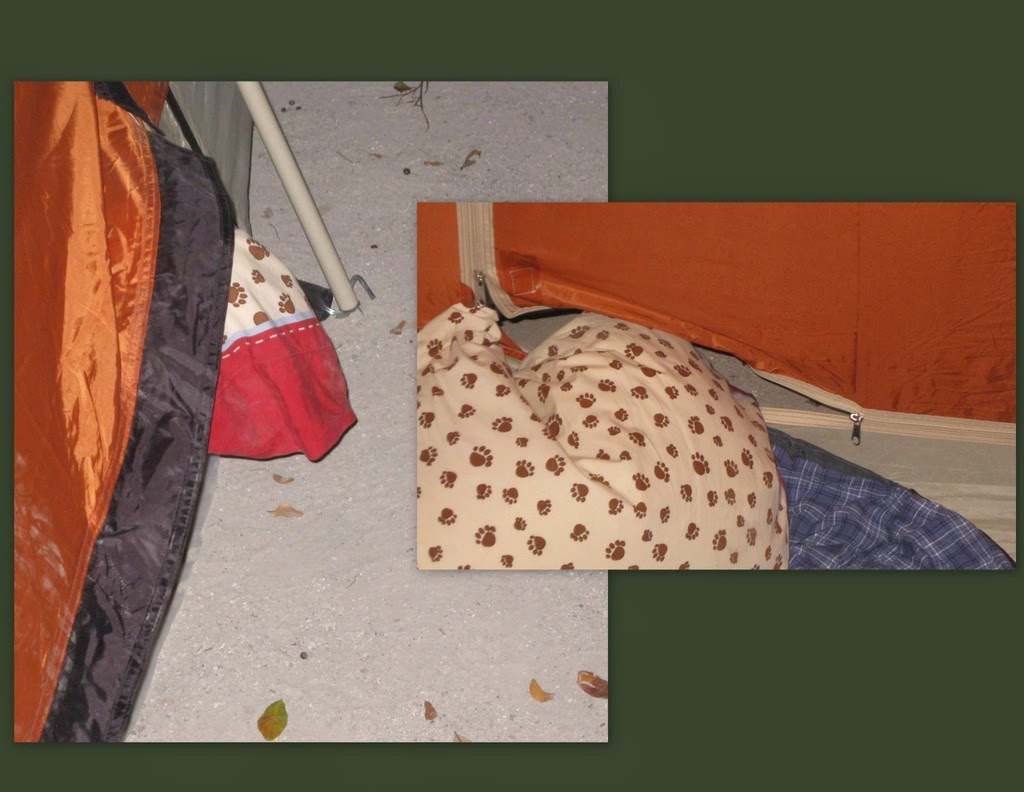 Grant really didn’t want to go to sleep that night because he felt like they were targeting him. He just happened to be the one sleeping at the back zipper, but he has not wanted to sleep in that spot since.  There are rip marks on his pillowcase, which he still uses because it matches his bed.

We discovered that we were easy targets because our tent zips to the bottom, but my brother-in-law’s tent zips at the top, so they were left alone. The raccoon invasion is known by those who frequent the park, but don’t bother to tell newcomers.  We watched two raccoons join fellow campers in their trailer. We promptly ran over to warn them, because they had not noticed them yet.  I think they would jump in your lap and take your hot dog if you let them!

All in all, we loved Fort Desoto and will definitely go back, in a different month. The wind was so fierce on our last day, we had to stay in our cars and we toured the area. This is the family portrait of our spring break vacation on the beach. I think it is hilarious because, this is family, with a little sand in our eyes. 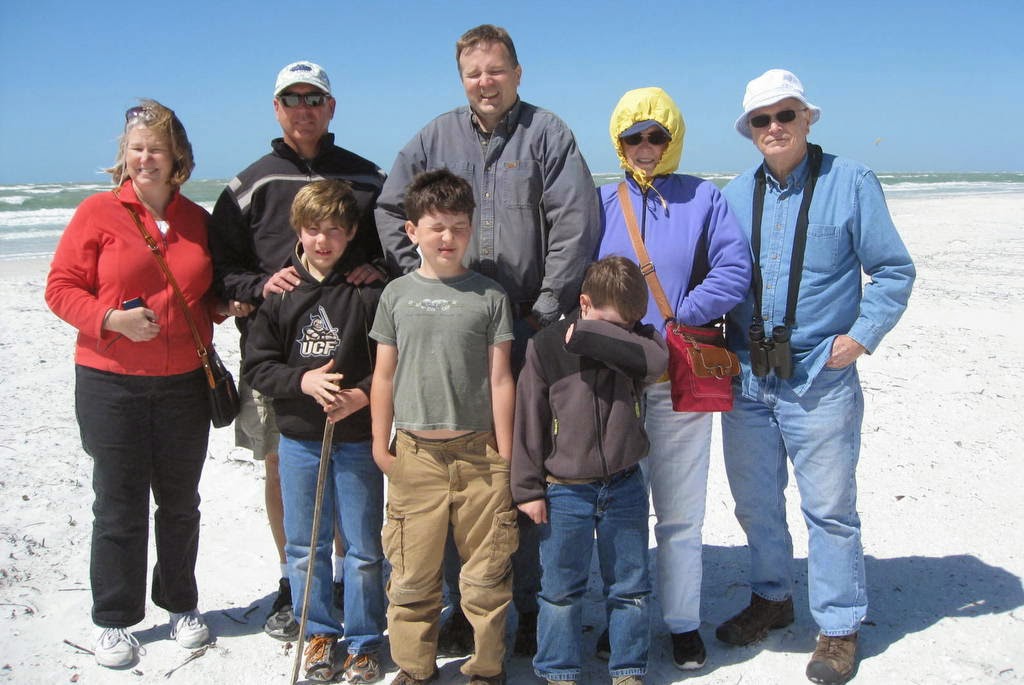 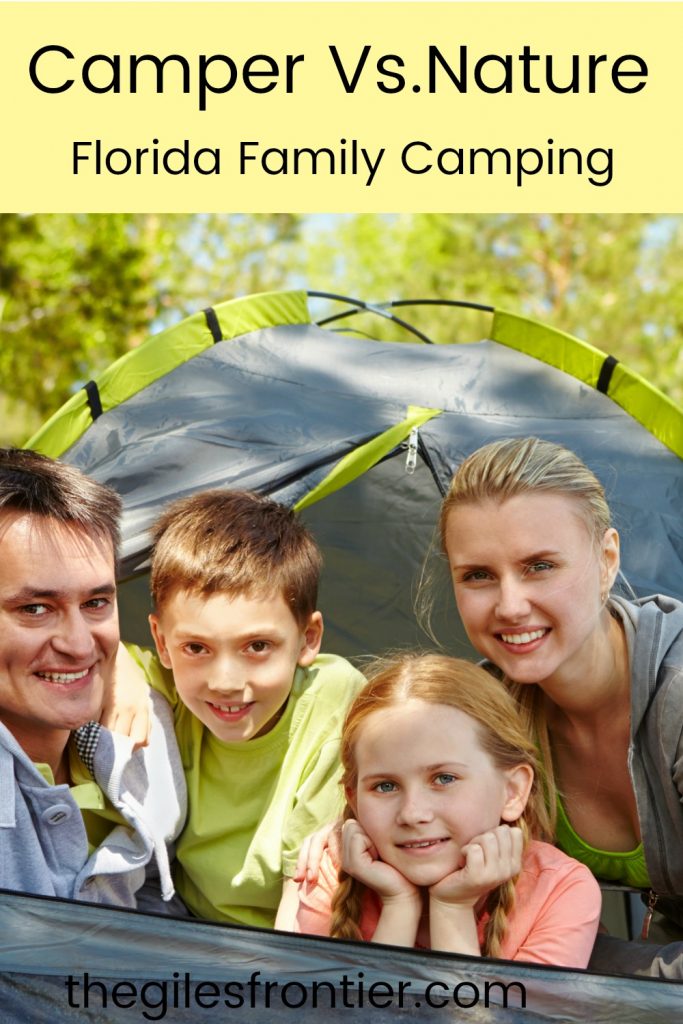